Omisore fires back at Soyinka: Drowning politicians using you against me 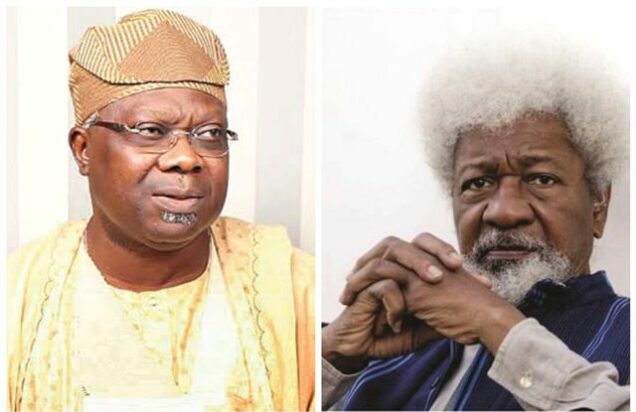 The National Secretary, All Progressives Congress (APC), Senator Iyiola Omisore has fired back at Nobel Laureate, Prof. Wole Soyinka for still regarding him as a prime suspect in the murder of Bola Ige when had been vindicated by the court.

He accused Soyinka of doing the biddings of drowning politicians, using him to get at him, warning that the professors did not have a monopoly of knowledge.

Soyinka had fired a salvo at President Muhammadu Buhari for anointing Omisore as APC’s National Secretary when he knew that he is still a prime suspect in the murder of Ige.

But Omisore, in a statement said if the court of the land had vindicated him, it was naive of Soyinka, after nearly a decade to link him to further search.

According to him, civil and criminal law knowledge should tell Soyinka to ask his cousin,  Obasanjo for the murder.

“The world is aware of the framing of Senator Iyiola Omisore and his travails and trials facing murder charges and his subsequent acquittal and discharge, almost a decade ago by a competent court of the land.

“So, how come any man can still refer to him as a possible suspect? The Prof is very wrong to say all that. It takes wickedness to spread the statements,” he said.

He said: “It is part of history and we are not too young when we read of him, that professor too carried a gun into a Radio station; a criminal offence against the state. Yet, we continue to honour him.

“Can we also forget that Prof was appointed the chairman of the education summit that gave birth to a single uniform for all secondary and primary schools and Opon Imo, during the tenure of Rauf Aregesola as governor of Osun State. A failed Education Policy that history will not readily forget.

“So, at 88, it’s better for him to stay clear of politics and not allow drowning politicians to use him to fight a cause he knows nothing about. It is a subtle warning to the respected Nobel Laureate.”