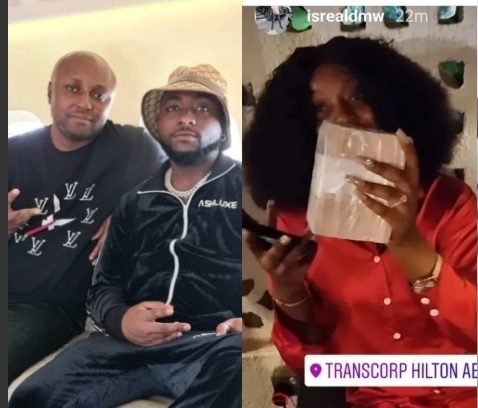 Davido, Ireal DMW and his fiancée.

Nigerian music singer and popular celebrity, David Adeleke, popularly known as Davido has extended his generosity to his aide’s woman.

The music superstar doled out half a million naira to Isreal DMW, his logistics manager and loyal crew member after he got introduced to his fiancée.

Israel Afeare, popularly known as Isreal DMW on Monday took to social media to reveal he proposed to his beautiful girlfriend with a clip and pictures on his Instagram stories.

Taking to his Instastory, Isreal revealed that Davido gave his woman a huge sum of money just to buy airtime.

A grateful Isreal thanked his boss for the good gesture.

Watch is appreciation video below.

Isreal became famous because of his job as Logistic Manager to Davido.

He was born on the 4th of October 1991 in Edo state, Nigeria, and grew up with both his parents and siblings.