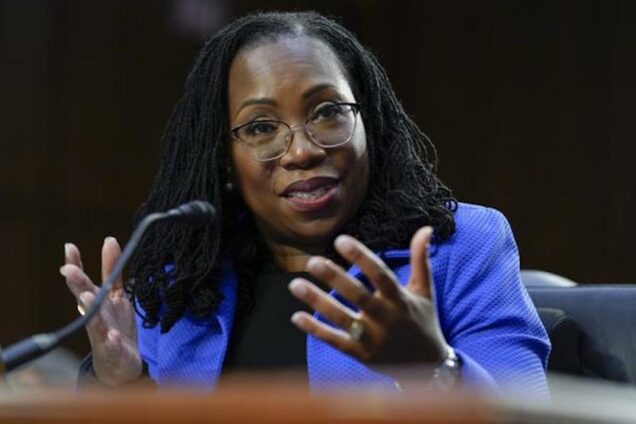 The U.S. Senate confirmed Ketanji Brown Jackson to the Supreme Court on Thursday, shattering a historic barrier by securing her place as the first Black female justice.

The Senate also gave President Joe Biden a bipartisan endorsement for his promised effort to diversify the high court.

Cheers rang out in the Senate chamber as Jackson, a 51 year-old appeals court judge with nine years experience on the federal bench, was confirmed 53-47, mostly along party lines but with three Republican votes.

Presiding over the vote was Vice President Kamala Harris, also the first Black woman to reach her high office.

Biden tweeted afterward that “we’ve taken another step toward making our highest court reflect the diversity of America.”

Senate Majority Leader Chuck Schumer exulted that it was “a wonderful day, a joyous day, an inspiring day — for the Senate, for the Supreme Court and for the United States of America.”

Harris said as she left the Capitol that she was “overjoyed, deeply moved.”

Jackson will take her seat when Justice Stephen Breyer retires this summer, solidifying the liberal wing of the 6-3 conservative-dominated court.

She joined Biden at the White House to watch the vote, embracing as it came in.

The two were expected to speak, along with Harris, at the White House Friday.

During four days of Senate hearings last month, Jackson spoke of her parents’ struggles through racial segregation and said her “path was clearer” than theirs as a Black American after the enactment of civil rights laws.

She attended Harvard University, served as a public defender, worked at a private law firm and was appointed as a member of the U.S. Sentencing Commission.

She told senators she would apply the law “without fear or favour,” and pushed back on Republican attempts to portray her as too lenient on criminals she had sentenced.

Jackson will be just the third Black justice, after Thurgood Marshall and Clarence Thomas, and the sixth woman.

She will join three other women, Sonia Sotomayor, Elena Kagan and Amy Coney Barrett – meaning that four of the nine justices will be women for the first time in history.

Her eventual elevation to the court will be a respite for Democrats who fought three bruising battles over former President Donald Trump’s nominees and watched Republicans cement a conservative majority in the final days of Trump’s term with Barrett’s confirmation.

While Jackson won’t change the balance, she will secure a legacy on the court for Biden and fulfill his 2020 campaign pledge to nominate the first Black female justice.

“This is a tremendously historic day in the White House and in the country,” said White House press secretary Jen Psaki after the vote.

“And this is a fulfilment of a promise the president made to the country.”