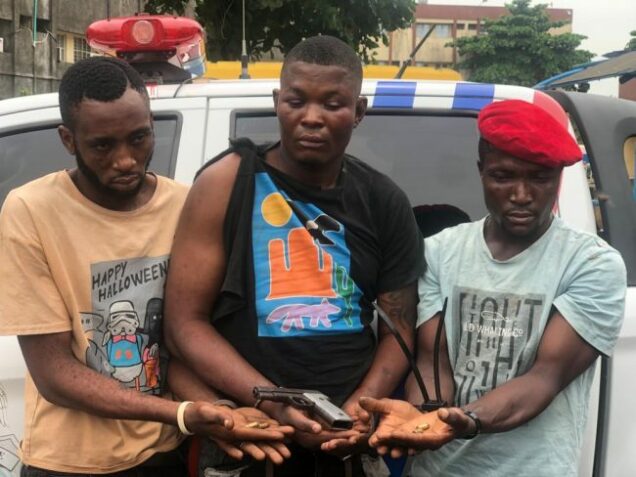 “The suspects were arrested following a tip-off from civic-minded Lagosians to the RRS officers who were on routine patrol along Ladipo and Oshodi.

“During the investigation, it was revealed that the suspects were members of Aro–Baga cult group.

“The first suspect, Omuyibo, confessed that they were about to rob their second victim when the RRS patrol team arrived on the scene,” said Hundeyin.

He added that a swift follow-up on the arrest led the RRS to their converging point at 7, Alhaji Monsuru Street, Ijegun, where two other suspects were arrested.

“A beretta pistol and four rounds of ammunition were recovered,” he said.

According to him, Omuyibo works as a welder, Nwanga repairs fuel pump at Ladipo Spare Part Market, while Igwe deals in illicit drugs.

The spokesperson said the Commissioner of Police, CP Abiodun Alabi, had directed the Commander, RRS, CSP Olayinka Egbeyemi, to transfer the suspects and exhibits to the CP’s Special Squad for further investigation and prosecution.