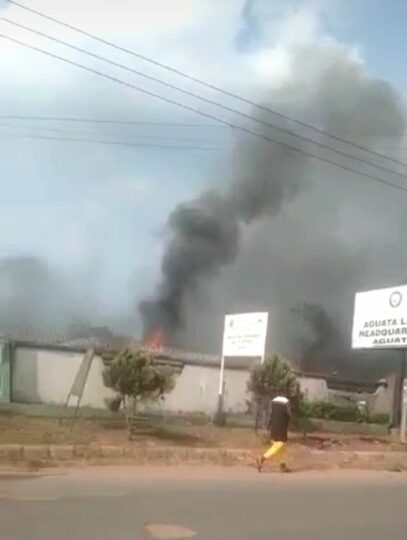 An eyewitness has described how gunmen on motorcycles wielding guns attacked the administrative headquarters of Aguata Local Government Council in Anambra, setting buildings and other property in the premises on fire on Thursday afternoon

According to the eyewitness, the arsonists arrived at the secretariat in their numbers on motorcycles wielding guns

The source feared that there could be casualties as many workers were trapped in buildings which were up in flames at the time of the attack.

“The gun-totting arsonists blocked the secretariat building with a truck and started shooting sporadically into the air.

“We are not sure yet if there are casualties because workers were still in their offices, but soldiers are already arresting youths of our community,” the source said.

Ikenga said no casualty had been recorded in the incident but the police and fire service operatives brought the situation under control.

He said police had been deployed to the area to restore normalcy and that a manhunt was on to track the perpetrators.

“We have also contacted the men of the Anambra Fire Service to put off the fire, and for now I can only say that details are still very sketchy.

“So far, no casualty has been recorded but there will be more detail after investigation is concluded,” he said.

A similar attack was carried out at the Nnewi South Local Government Council headquarters on March 31.

Gov. Chukwuma Soludo has set up a 15-man Truth, Justice and Peace Committee to inquire into the insecurity in Anambra and proffer solution.