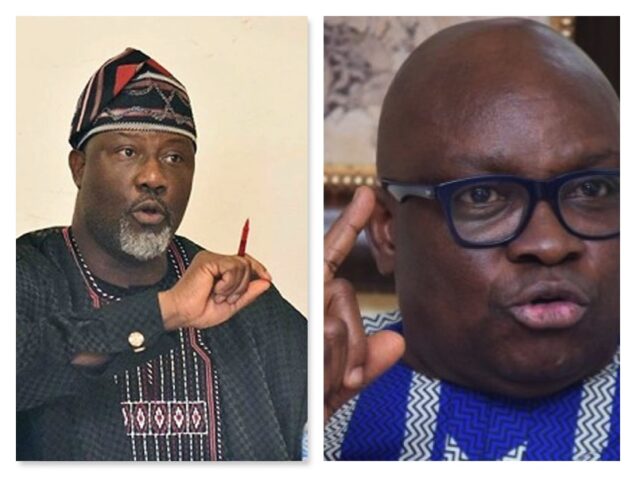 Former Senator representing Kogi West, Dino Melaye has lashed out at former Governor Ayodele Fayose, saying the presidency of Nigeria is not an ‘amala and ponmo’ affair.

Melaye attacked Fayose after the latter questioned the morality of the presidential ambitions of Atiku Abubakar and Bukola Saraki.

Fayose who had also declared his intention to contest the 2023 presidency went to consume ‘amala’ in an Abuja restaurant after picking his form.

Hours later, on a television programme on Wednesday, he condemned the renewed bid by Atiku and Saraki to rule the country.

He accused them of contributing to the PDP loss of power in 2015 when they went to align with the then opposition All Progressives Congress, APC.

But in a cheeky response on Thursday night, Melaye said Fayose was inebriated by several wraps of amala in launching the attacks on Saraki and Atiku, who he described as two serious contenders for the presidential ticket of PDP.

Inebriated by several wraps of Amala in Abuja, former Governor of Ekiti State, Ayodele Fayose, in his characteristic exuberance directed indecent and indecorous attacks at two serious contenders for the Presidential ticket of the People’s Democratic Party, HE Atiku Abubakar and HE Bukola Saraki.

Incidentally, the mauling of Amala gained more publicity over the collection of the Presidential nomination form, in a pretentious exhibition of dining with the masses. This frugal populism has since been deflated by allegations of charges for the ferreting of billions of naira from public coffers in Ekiti State. Is Amala and Abula so expensive?

The issue before Nigerians now is not who can eat more , but who can produce food. That is why the attempt to tar the outstanding achievements of Atiku Abubakar as former Vice President and Bukola Saraki as former Senate President by Fayose would be discounted as the belching perfidy of a Presidential gambler.

It is clear from the verbal missiles deployed by Fayose that he was simply de-marketing frontline aspirants in PDP as a
counterintuitive strategy to shore up the chances of his political godfather in APC.

It is amazing that Fayose who could not manage and retain a PDP state now aspires to lead a behemoth structure like Nigeria. Today, Ekiti is stripped of all vestiges of PDP; no PDP Senator, no PDP House of Representatives Member, no House of Assembly member, no Local Government Chairman, and not even a Councillor. He left Ekiti State worse than he met it. How could he fail in the state and expect promotion to the National?

The contest for the ticket of PDP and the Presidency of Nigeria is a serious engagement. Those who aspire to the position must elevate themselves above pedestrian conduct and address real issues, rather than dwelling on inconsequential inanities.

The National Leadership of our great Party should call Fayose to order, by curtailing his unproductive verbiage against serious contenders. Having failed to upgrade from local political space to the National stage Fayose may indeed be assisted to undertake a week-long orientation session on the ethics and codes of peer relations on a Presidential canvass.

Nigeria is in dire straits at the moment. It is beyond the call of jesters in the corridors of elevated governance.