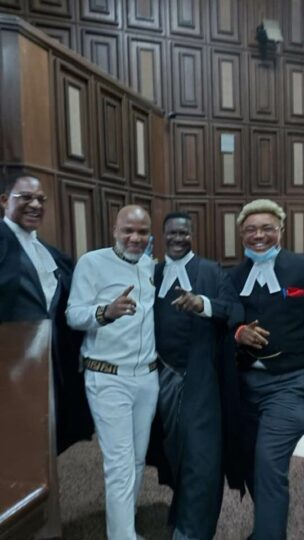 The Federal Government and Nnamdi Kanu, leader of the Indigenous People of Biafra shared victories on Friday, as the treason trial resumed in Abuja.

While the Federal High Court, Abuja on Friday, exonerated the Federal Government over the abduction of Kanu in Kenya, the court also struck out eight of the 15 counts slammed against the separatist leader.

Justice Binta Nyako, who gave the double ruling held that rendition for the purpose of criminal investigation is allowed.

Nyako said since Kanu was on bench warrant, the law allowed that anywhere he is sighted, he can be arrested and be brought to face his trial.

“Rendition for the purpose of criminal investigation is allowed.

“In the instant case, there is bench warrant on the defendant (Kanu). Suffice to say, he is a fugitive before the court,” she said.

While she struck off eight of the counts, she upheld seven of them.

Nyako said that the federal government, through the Office of the Attorney-General of the Federation (AGF), had been able to establish some allegations against Kanu in counts 1, 2, 3, 4, 5, 8 and 15.

“The court shall proceed to try the defendant (Kanu) on those counts, ” she ruled.

After the review of the 15 counts, she held that eight of the counts appeared to be similar and did not disclose action.

Nyako also ruled that the order proscribing IPOB as a terror group still subsisted until it was vacated since the issue was on appeal.

She dismissed the argument of Chief Mike Ozekhome, SAN, counsel for Kanu, that whether IPOB was a terrorist organisation under the Nigerian law or not is a subject of appeal.

On Kanu’s bail plea, the judge directed counsel to the parties to present their arguments.

Ozekhome, therefore, argued that his client had never flouted any of the bail conditions, but that Kanu only escaped for his dear life during an attack at his residence.

Citing judicial authorities, he said that “until a person is tried and convicted, he should be allowed to walk free.”

He said his client was still innocent until proven otherwise.

“I humbly urge my lord to use your discretion to grant him bail subject to my lord’s condition,” he said.

But lawyer to the AGF, Shuaibu Labaran, disagreed with Ozekhome, contending that Kanu had violated all the bail terms.

He said because the IPOB leader jumped bail, that was why the court revoked his bail and ordered for his arrest anywhere he was sighted.

Labaran further argued that what should be the subject matter before the court was issue of contempt charge against Kanu and not bail application.

“My lord granted him bail on 2017 on health ground, but since then till date, no medical record was submitted to the court until he jumped bail.

“What we should be saying is contempt of court because he has flagrantly violated the orders of the court,” he said.

He urged the judge to be guided by her discretion vis-a-vis the circumstances of the case.

The lawyer said in the alternative, Nyako should make an order of accelerated hearing on the matter so that Kanu could “know his fate one way or the order.”

The judge adjourned the matter until May 18 and May 26 for ruling on Kanu’s bail application and for trial continuation.

Speaking with newsmen shortly after the proceeding, Shuaibu Labaran said the court aligned with the federal government on arguments about rendition.

According to him, the court said that rendition is lawful.

“On issue of rendition, the court bluntly said that rendition, in this situation, is allowed because rendition in criminal case is allowed.

“After all, the defendant is under a bench warrant and anywhere he is seeing, the law allows it to be forcefully brought to court,” he said.

On his part, Ozekhome told journalists that the remaining seven counts affirmed by the court would be challenged at Court of Appeal.

Kanu on Jan. 19 challenged the terrorism charge filed by the federal government against him, arguing that the amended 15-count charge preferred against him was unmeritorious and should be thrown out by the court.

The IPOB leader, through his lawyer, Ozekhome, on Thursday, filed N50 billion damages against the federal government and the AGF over his alleged abduction in Kenya and continued detention.

Kanu had requested N100 million as compensation for the cost of the action at the Federal High Court in Abuja in a suit marked: FHC/ABJ/CS/462/22 dated March 7.

The applicant argued that his “abduction and rendition to Nigeria without extradition proceedings or hearing in Kenya is a clear violation of Article 12(4) of the African Charter on Human and Peoples Rights (Ratification and Enforcement) Act CAP A9, LFN 2004.”

He said it also “violates Article/part 5 (a) of the African Charter’s Principles and Guidelines on Human and Peoples’ Rights.”

Of the seven-count charge that Kanu will now face, two of them are:

Count One: “That you Nnamdi Kanu, Male, Adult, of Afatanukwu Ibeku, Umuahia North Local Government Area of Abia State sometimes in 2021 being a member and leader of Indigenous People of Biafra, IPOB, a proscribed Organisation, did commit an act in furtherance of an act of Terrorism against the Federal Republic of Nigeria and the People of Nigeria by making a broadcast received and heard in Nigeria within the jurisdiction of this Honourable Court, with intent to intimidate the population and you threatened that people will die, the whole world will stand still and you thereby committed an offence punishable under Section 1(2)(b) of the Terrorism Prevention Amendment Act, 2013.”

Count two: “That you Nnamdi Kanu, Male, Adult, of Afatanukwu Ibeku, Umuahia North Local Government Area of Abia State on diverse dates between the month of March and April 2015 imported into Nigeria and kept in Ubulisiuzor in Ihiala Local Government Area of Anambra State within the jurisdiction of this Honourable Court, a Radio Transmitter known as Tram 50L concealed in a container of used household items which you declared as used household items, and you thereby committed an offence contrary to section 47(2)(a) of Criminal Code Act, Cap, C45 Laws of the Federation of Nigeria 2004.”

Counts 3, Kanu is accused of intimidating and threatening that people will die including those who violated his sit-at-home directive.

In count four, the IPOB leader was said to also make several broadcast between 2018 and 2021 wherein he incited members of the public in Nigeria to hunt and kill Nigerian security personnel, including police officers and their family members.

In count eight, Kanu was accused of directing members of IPOB to manufacture bombs, while he was in count nine accused of “intent to destabilize the fundamental political and economic structures of Nigeria” and inciting “members of the public to stop the Anambra State elections” and thereby committed an offence punishable under section 1 (2) (h) of the terrorism (Prevention) (Amendment) Act 2013

Count 15: “That you Nnamdi Kanu, male, adult, of Afaranukwu Ibeku, Umuahia North Local Government Area of Abia State on diverse dates between the month of March and April 2015 imported into Nigeria and kept in Ubulisiuzor in Ihiala Local Government Area of Anambra State within the jurisdiction of this honourable court, a radio transmitter known as Tram 50OL concealed in a container of used household items which you declared as used household items, and you thereby committed an offence contrary to section 47 (2) (a) of Criminal Code Act, Cap, C45 Laws of the Federation of Nigeria 2004.”