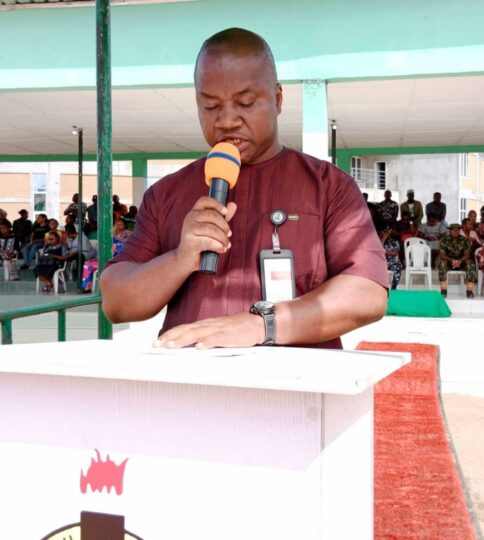 George Mfongang, the Rivers State Coordinator of NYSC represented of DG-NYSC at the ceremony

Maj-Gen Shaibu Ibrahim, the Director General of the National Youth Service Corps on Thursday urged corps members to execute community projects that will have impact on their host communities.

He also urged Corps members to endeavour to learn the language and culture of their host communities as part of the moves to help unite the country.

Ibrahim gave the charge in a nationwide address to mark the Terminal Parade/Closing ceremony of 2022 Batch A Stream 2 orientation course exercise.

George Mfongang, the Rivers State Coordinator of NYSC represented the DG of NYSC at the ceremony

He stated that the entire nation looks forward to their roles in advancing the unity, integration and development of the country.

He also charged the corp members to remain patriotic, hardworking and resilient in the performance of their duties, devote time to identify the felt needs of their host communities.

“Help your host communities to surmount the needs by initiating and executing personal and group Community Development Service projects that will uplift the living standards of the people,”he said.

The NYSC-DG harped on the importance of the NYSC Trust Fund, stating that when signed into law and becomes operational, it will further enhance the quality of the Scheme’s programmes.