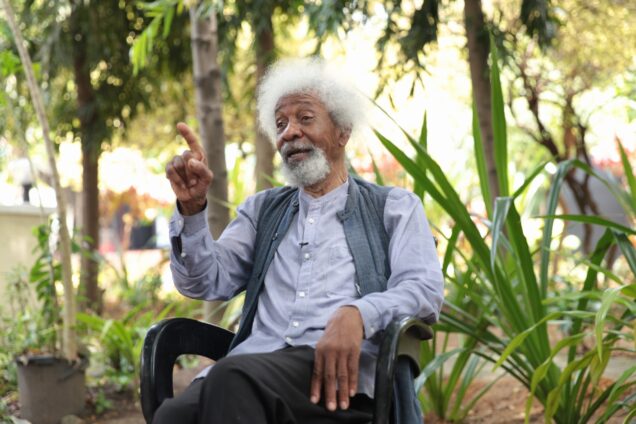 Nobel Laureate, Professor Wole Soyinka has said that Nigeria has become a slave depot with a new era of slavery and slave trade taking place right before the very eyes of everyone in the country.

Soyinka made this statement at a media parley tagged: Forget The Past, Forfeit The Future: A Nation Seceding From Humanity, which held on Thursday, 7 April 2022 in Lagos.

The Nobel Laureate was reacting to the way children ad others are being kidnapped with reckless abandon in the country, arguing that Nigerians are literally being handed over to terrorists.

Soyinka also said there was nothing wrong with Nigerians calling for international assistance to curb the security challenges in the country, adding that Nigeria is overqualified for it; since according to him, quoting former President Olusegun Obasanjo, “the situation has overwhelmed the government.”

“I want us to go back, for instance to the kidnapping of the Chibok girls, where we the citizens, the parents, the teachers who are supposed to be the guardians virtually took our children, herded them together and handed them over to these slave traders to do what they wanted with. In effect that’s what we did – Gathered them, made it easy for them to be captured.

“And we are saying that our children are being enslaved. A new era of slavery, of the slave trade is taking place. And this is not a metaphor. We all know very well that we are being sold in the market to Tripoli. You know, Dabiri went and rescued a number of people from the slave market.

“In other words, Nigeria has become a slave depot. We supply the material, only we make it much easier than the original Arab and European slavers. At least they had to hunt for their victims. These days we just hand them over in trains, hand them over in aeroplanes, in schools no matter the age.

The Nobel Laureate then said the incessant kidnapping and enslavement of children make Nigeria over qualified for international assistance.

“And I have stated again and again, reminded people that the UN protocols forbid trafficking in human beings In other words the era of slave trade is supposed to be over. So if there is any event of violence that qualifies us to ask for external international help. I think the kidnapping and enslavement of our children certainly qualifies to be one.

“And so rather than look to mercenaries. I would say that let’s begin with the kind of international obligations we have fulfilled for other people and ask for similar help internationally. Make it official, formal, admit as, to cite my good neighbour Olusegun Obasanjo, that the situation has overwhelmed his government,

“We are overqualified for international assistance. And let us stopped riding on spurious national integrity and false pride and say we have reached the limit. We have reached the end of our tether, we need help. And it doesn’t have to be just peacekeeping force, anything, Soyinka averred.