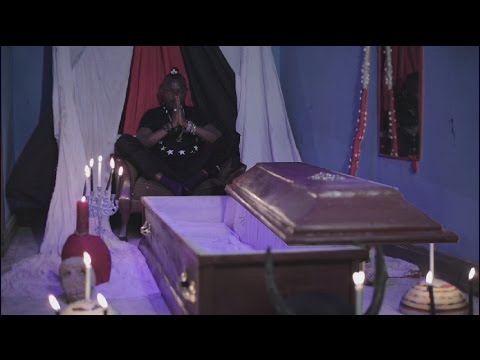 A picture from a Nigerian movie titled Shina Rambo reloaded.

Mr. Steven Adesemoye, a media and communication expert has refuted the claims that Nigerian films are responsible for fueling ritual killings.

Adesemoye told the News Agency of Nigeria (NAN) on Saturday in Lagos that the filmmakers were only inspired by events in the society.

According to him, films only mirror the existing rots in society.

Adesemoye, who also lectures at the Department of Mass Communication, Lagos State University of Science and Technology (LASUSTECH), said that Nigerian filmmakers were greatly influenced by happenings in the country.

“They do environmental scanning to access and process their stories. What they see, what they have heard, and what may happen are reflected in their stories.

“I have seen a few Nigerian films in different languages, genres, and formats; none has glorified evil above good in its resolution.

“Evil is always punished and negatively portrayed. And I think that’s enough takeaway since we can hardly do away with evil acts in society.

“Suffice to say here that, filmmakers have helped to unveil the evils behind locked doors and prescribed regrettable ending for the villains,” he said.

The film theorist noted that spirituality had always been the major central dramatic problem of our stories since the days of Yoruba theatres.

“Spiritualism gives birth to ritualism. Even when the likes of late Hubert Ogunde moved from street to screen, supernaturalism and paranormal activities were very much pronounced in his stories.

“How come the whole country didn’t adopt fetishism?” He queried.

Adesemoye, who is also a researcher in the Department of Media and Communications, University of Malaysia, added that individuals do not have empty minds when exposed to media content.

He said that the audience was not passive but active, noting that individual difference, social status, and selective exposure play prominent roles in how media content is received, processed and applied.

“Many scholars have established the fact that consumption of media has its effects on individuals, as we were made to understand that the reinforcement or repetition leads to penetration and probably adoption.

“We have also established that most human behaviors are learned through observation and imitation.

“The audience receives, negotiates, accepts or rejects and applies or discards.

“The communication theories that I have tried to summarise from cultivation to social learning and reception have variables that must be considered before all the processes can take effect.

“This is the point we are all missing out, especially the government on this issue of ritual killings and Nollywood,” he explained.

He called on government at all levels to address the ills plaguing society, rather than solely blame Nollywood for the increasing rate of moral decadence.

“Government needs to revamp the economy, revive the education sector, regulate religious excesses and make our laws work for everyone.

“No economy can survive without power supply and no business can thrive amid insecurity.

“If the issues I have raised are not addressed, they will all reflect in the kind of stories that filmmakers will dish out to us,” he said.

He also called for the proper structure of the Nigerian film industry to harness its potential.

“Nollywood is a huge business. It is an international branding platform, a diplomatic tool and a formidable destination marketer.

“The cinema value chain is a huge employer of labour if well structured. Structure the training, exhibition, distribution, law & regulations, funding, welfare, data, and others,” he said.