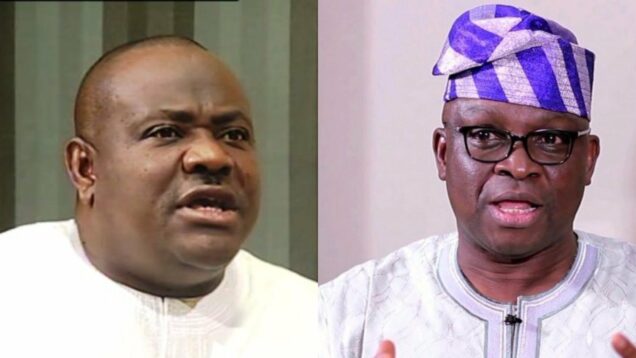 As Nigeria’s political parties announce the dates of their primaries for the 2023 general elections, the Muslim Rights Concern (MURIC) has urged delegates to avoid Gov. Nyesome Wike, Gov. Kayode Fayemi, and his predecessor, Ayodele Fayose.

This was disclosed in a statement made available to journalists on Saturday, 9th April, 2022 by the director and founder of the human rights organization, Professor Ishaq Akintola.

“We have it on good authority that some Muslim-haters and persecutors of innocent and law-abiding Muslims are among those who have indicated their intention to vie for the highest office in the land. They have every right to contest or show interest, but Nigerian Muslims reserve the right to reject those who have demonstrated pathological hatred towards them while in power.

“Our targeted audience for this press release are the organizers and delegates of the coming primaries for the 2023 general elections for state assemblies, gubernatorial, house of representatives, senate, and presidential elections in all political parties in Nigeria. They are advised to avoid presenting candidates who have had face-off with Muslims under them while in power.

“We are going to be generous with examples so that leaders of these political parties, the organizers of their primaries as well as their delegates will know that they have been warned. Our caveat is non-partisan. Our only interest is to avoid the molestation of Muslims by well-known Muslim haters and to protect their Allah-given fundamental human rights from repeated abuse.

“Wike is wicked market as far as Muslims are concerned. They will not touch him with a long pole. Or was it not Nyesome Wike who, contrary to Section 10 of the 1999 Constitution of the Federal Republic of Nigeria, repeatedly declared Rivers State a Christian State? He said and we quote, “Rivers State is a Christian State and I have no apologies for saying that” (https://www.nairaland.com/5262619/governor-wike-rivers-christian-state/5)

“That was on 23rd June 2019. In spite of the outcry against the illegal, unlawful, illegitimate and unconstitutional declaration, he repeated it again 18th November 2019 (https://www.vanguardngr.com/2019/06/i-repeat-once-again-without-apologies-rivers-state-is-a-christian-state-wike-tells-muoka/). With reckless impunity, Wike defied all decorum, all protocol, all norms. (https://guardian.ng/news/i-owe-nobody-apology-declaring-rivers-christian-state-wike-insists/). No responsible political party will consider such a man for the post of president.

“Wike did not stop at mere declaration of Rivers State as a Christian State. He actually showed Nigerian Muslims that he is numero uno Muslim hater when he dispatched bulldozers, thugs and mobile policemen to demolish the Trans Amadi Central Mosque on Tuesday, 20th August, 2019. This was a mosque that had an approved survey plan (AI/RV2009/D13) and an approved building plan (RTP/09/617). Both were approved by the state government since 2009 (before Wike became governor).

“Wike is wicked market. He has no electoral value except in the deployment of Weapons of Mosque Destruction (WMD). Make him the president of Nigeria in May 2023 and all mosques in the country will be in ruins by December 2023. Wike does not stomach advice. He is pugnacious, irrational, erratic and highly unpredictable. Make no mistake about it, Wike is an irredeemable electoral liability.

“Ditto for Ayodele Fayose and Kayode Fayemi. These are Christian political leaders who are notorious for marginalising Muslims and persecuting them. Fayose ran an all-Christian administration with no single Muslim in his 14-member cabinet, all 12 permanent secretaries, and all eight board chairmen except the Muslim pilgrims’ board where he had no choice.

In any case, MURIC’s policy statement on our preference of a Muslim candidate from the South West already excludes both of them. Any political party, be it APC , PDP, Labour Party or National Conscience Party (NCP), etc that picks known Muslim haters has thrown its chance to the dogs. If Fayose’s administration was six, Fayemi’s APC regime in Ekiti State is half dozen.”