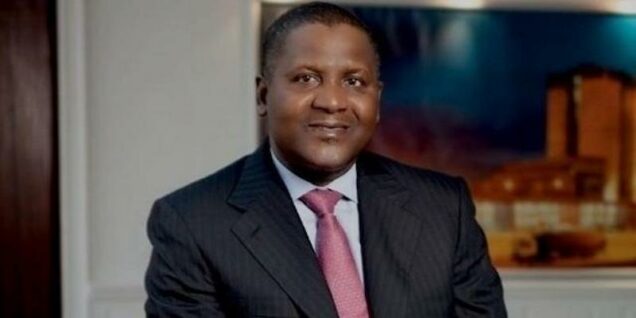 Sen. Orji Kalu, the Chief Whip of the Senate has felicitated with the founder and President of Dangote Group of Companies, Alhaji Aliko Dangote as the latter turned 65.

In a goodwill message issued in Abuja, Kalu described Dangote as an outstanding Nigerian, recognised beyond the shores of Africa for his giant accomplishments in business and humanitarian circles.

The former Abia governor stated that Dangote is a source of inspiration for his contemporaries and the younger generation.

Kalu acknowledged the invaluable contributions of the philanthropist to nation-building through various platforms.

He added that Dangote’s business empire provided employment and wealth for millions of Nigerians.

The Senate Chief Whip prayed for long life for Dangote, noting that his good deeds would continue to speak for him.

Meanwhile, Kalu urged the celebrant not to relent in his initiatives at improving the lot of the common man through his numerous philanthropic gestures.

“I congratulate the Founder and President of Dangote Group of Companies, Alhaji Aliko Dangote as he clocks 65.

“The celebrant is a household name in the business community across the globe.

“His business empire and humanitarian platforms have created jobs and wealth for Nigerians and non-Nigerians alike across the globe.

“The giant accomplishments of Dangote in all facets of life should be acknowledged and celebrated across the globe.

“The celebrant has done Africa and in particular, Nigeria proud in business and humanity.

“I join family, friends and associates of Dangote in wishing him long life in sound health,’’ Kalu stated.