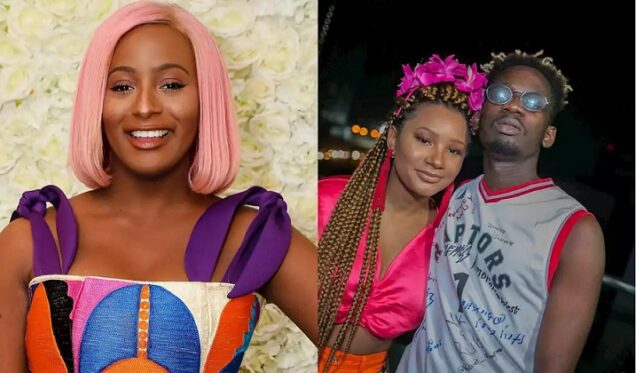 Popular Nigerian musician better known as Mr Eazi has indeed hit a gold mine. Not only has he proposed to Temi Otedola, fashionista and daughter of Nigerian billionaire Femi Otedola, his popularity rating has upped as news of their engagement set the internet on fire.

Set the internet on fire? Certainly. The engagement is currently trending because Nigerians had waited with bated breath for four years for it to happen as the lovebirds, who have been named the country’s favourite celebrity couple had all that while stirred social media with their love story. But the truth is, Temi has finally given him “leg over” – a slang that Mr Eazi himself popularized with his hit single, Leg Over.

Their love story is no doubt a fairy tale, if the events that kick-started it are anything to go by. Still, no sooner had the couple made their engagement public than Nigerian celebrities, palpably excited about it, congratulated the love birds. They include: Tiwa Savage, Simi, Joeboy, Adesua Etomi, Broda Shaggi, Sharon Ooja, and BBNaija stars Bisola and Neo

However, notable among the celebrities is Temi’s sister, popular Disc Jockey and artiste Florence Otedola, aka DJ Cuppy, who is currently studying for a second Master’s degree at the University of Oxford.

In another tweet, she said, “I’m so happy that my lil sister Temi Otedola has found her personal person! Yo @MrEazi I’ve always wanted an older brother, WELCOME TO THE FAMILY! PS: I introduced you guys, so you better find me my own o!”

Indeed, DJ Cuppy played a very pivotal role in the celebrity couples’ love story, as it was through her that Mr Eazi and her sister met. That was what DJ Cuppy meant when she tweeted on Sunday that she introduced them to each other.

However, Mr Eazi had in an interview he granted in 2018 said though he met Temi through her, she (DJ Cuppy) did not introduce her sister to him, in the strict sense of the word. But that he met his fiancée through DJ Cuppy.

The Leg Over crooner was quoted as saying he met his fiancée when her sister, DJ Cuppy, who is his friend, invited him for one of her numerous events in London, United Kingdom. According to him, they were left at the same table and got talking after DJ Cuppy left the table for the stage to perform.

“I met Temi in London. It was an event, her sister invited me for an event. Her sister was playing at the event, somewhere in Knightbridge and she said, oh come out come out, follow me to this event, so I followed her to the event and then she was deejaying and all of a sudden it was just me and Temi sitting down and just watching her,” Mr Eazi revealed.

However, Eazi said the celebrity Disc Jockey didn’t, at any point, formally introduce Temi as her sister or him as a friend, adding that he “toasted” his fiancée in her absence and they clicked.

“Not really, she didn’t like meet my sister, you know, she invited her sister, she invited me. And by the time her sister came, she was already playing, so her sister came to the table and it was me and her. So, obviously, you have to socialise, so I said, Hi what’s up, my name is Mr Eazi,” the Leg Over crooner maintained.

Still, Temi revealed in the podcast, ‘How far with Mr Eazi and Temi’ that it was her sister DJ Cuppy who introduced her to him, adding that DJ Cuppy had told her that she liked him but if the relationship didn’t work well with both of them, she would continue her working relationship with Mr Eazi.

“I can never forget the only thing she (DJ Cuppy) said, Those first weeks we were dating, she had obviously introduced us and she was there and she was still cultivating a working relationship with you [Mr Eazi].

“And so, she calls me and said ‘so you guys are dating officially and I said, yes, I like him and she said, all I am going to say is that if things don’t work well with you both, I am going to maintain my work relationship with him [Mr Eazi]’ and she was straight up about it.”

It will be recalled that Mr Eazi’s working relationship with DJ Cuppy started when he employed her service as a Voice-over artiste to release this track entitled Fight. This song was released as the 6th track off his 2017 album, Accra To Lagos.

Still, DJ Cuppy has never hidden her support for her sister. Reacting to the “How Far Podcast of Temi and Mr. Eazi,” she once said listening to the podcast “makes me want to fall in love this year,” urging them to “please stay together forever!”