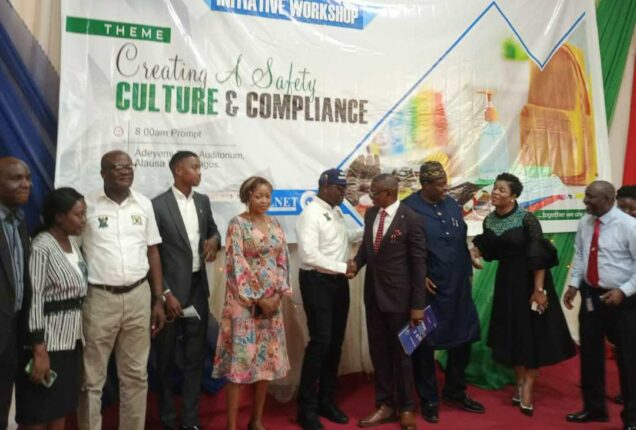 Mojola and other stakeholders t the event

The Lagos State Government on Monday charged all schools in the state to comply with safety regulations in their domains as the government will not tolerate violation of such regulations.

The event has the theme: “Creating a safety culture and compliance.”

It was organised by the Lagos Safety Commission, in collaboration with the Office of Education Quality Assurance and SchoolRun Academy.

According to Mojola, the Safe Schools Lagos initiative is a programme aimed at ensuring a safer school environment for effective teaching and learning processes in formal and informal education centres across the state in line with the THEMES agenda of the present administration led by Governor Babajide Sanwo-Olu.

He explained that Safe School Lagos initiative was designed to deepen safe practices, inculcate a culture of safety and promote self-compliance to safety regulations, standards and codes of practice in all tiers of learning, taking into consideration all stakeholders, such as students, academic and non-academic staff, parents/guardians, visitors to the premises and the entire neighbourhood.

In his words: “Safer schools produce safer children and safer children are the bedrock of the future. So what we shall be doing is to meet school operators and engage them on how we can make safety the fulcrum of the curriculum within the schools.

The Commissioner for Education, Mrs. Folashade Adefisayo, stated that the SSLAG initiative is a proactive measure to curb bullying, cultism, auto accidents, among others in both the public and private schools across the state.

who was represented by the Permanent Secretary of the ministry, Mr. Abayomi Abolaji said apart from the measure being put in place to curb bullying in schools, the government has started identifying schools on major roads that are prone to auto crashes, in order to prevent reoccurrence of the incident that happened at grammar school in Ojodu area.

He noted that the schools on the highway would have speed breakers and traffic lights while officers like Neighborhood Watchers, Federal Road Safety Corps, and Lagos Safety Commission would be engaged to ameliorate the situation.

The Director-General, Office of Education Quality Assurance, Mrs Abiola Seriki-Ayeni, said the primary responsibility of her office was the delivery of qualitative education in Lagos State.

She said this collaborative effort between her office and Lagos Safety Commission to ensure maximum security, protection and well-being by setting safety standards for all public and private schools within the state, was laudable.

The Chief Executive Officer, SchoolRun Academy Ventures, Dr Bisi Esuruoso, said, “There is a need to regulate certain places, people, products, services and/or activities that school-aged children are exposed to and from September 1, 2022, places such as churches, mosques, fun-themed parks and learning centres would be regulated for safe practices.”