Osinbajo will make good president of Pentecostal Republic of Nigeria 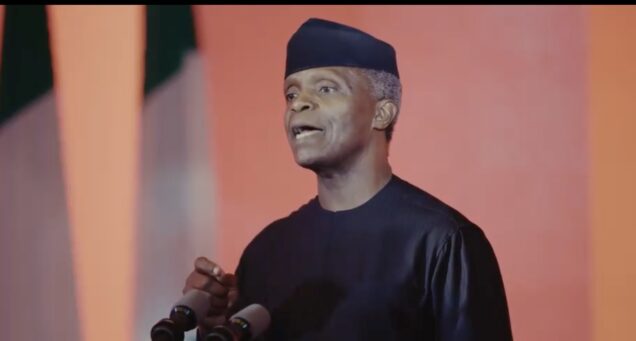 I don’t know why Yemi Osinbajo is running kitikiti, running katakata, “no fit drink water drop cup” (apologies to Goya Menor) since I wrote just two articles about him that merely scratched the surface of his deep-seated bigotry, especially for someone who wants to be president.

He is now spending millions to invite Imams and Islamic scholars to deodorize his bigotry, to sponsor tafsirs in mosques and radio stations, and to pay northern Muslim PR hacks to attack me in order to deflect attention from his past exclusivist, particularistic politico-religious rhetoric.

What’s that intended to achieve? He can commission a troll factory of mercenary and mediocre imbeciles to write juvenile screeds against me. It’s like water off a duck’s back. I don’t even read them.

It is Osinbajo who should explain to Nigerians why he sees the RCCGification of Nigeria (starting with Yorubaland) as his raison d’être for being in government in a country fragmented by religious division.

He should explain why, even as Vice President, he doesn’t pretend to see the entire Nigeria as his constituency, particularly in appearances at Christian functions.

To give another example hiding in plain sight, during a speech he gave at the Coalition of Nigerian Apostolic Leaders in Lagos, according to a Nov. 4, 2016 Vanguard story titled “Tinubu nominated me for Vice President- Osinbajo,” he said his election as Vice President was an opportunity for Christian leaders.

“I was a product of this system [i.e., Christian Apostolic leaders],” he said. “The Church was reluctant, and I understood why the church was reluctant; the church was looking at the head of the ticket [i.e., Muhammadu Buhari who has been portrayed as a Muslim fanatic who’d Islamize Nigeria]. This is our first opportunity. This is our first shot at it. We need to maximize it and do the best we can. I think what my nomination and appointment have done is that it has open [sic] the door for us. We can do it and we can be influential in doing it.”

Now, tell me which other vice president in Nigeria’s history has ever talked like this publicly.

After saying Buhari (whom he called “the head of the ticket”) is the reason the Church initially didn’t want him to run in 2015, Osinbajo then basically said his vice presidency is the “first opportunity” for Christian leaders and that they need “to maximize it” and be “influential in doing it.”

Never mind that, by his own admission, it was a Muslim (whom he is now fighting using religion) who nominated him for the position.

Osinbajo’s records show that he sees himself as a Christian leader in government out to advance the cause of his religion to the exclusion of others. So, why is he running away from his records? Why is he now pretending to be who he is not because I blew the lid off his bigotry of which he had been proud?

Up to 90 percent of his discretionary hires (forget the employees imposed on him by the presidency and the federal civil service) reflect the mindset of a person who wants to “maximize” the “first opportunity” of a Christian leader in government and who is “influential in doing it.”

Just take a look at the list of the 35 aides of his that the Buhari cabal fired in November 2019. It tells you all you need to know.

He has even been credibly accused of “maximizing” his position as VP to “influence” the choice—or, more accurately, the RCCGification— of traditional rulers and vice chancellors in the Southwest. There’s more, but it’s unnecessary at this point to belabor it.

Why would anyone want to elect as president someone who, even as an elected vice president, repeatedly and publicly proclaims himself as the representative of a narrow, divisive constituency?

When Buhari started his administration in 2015 by disproportionately appointing northern Muslims into important positions, I was one of the first people to call him out at a time it was dangerous to do so, especially for a northern Muslim. Read my September 05, 2015, Daily Trust column titled “Buhari is Losing the Symbolic War.”

On February 02, 2019, I wrote another column titled “Even Ahmadu Bello Would Be Ashamed of Buhari’s Arewacentricity.”

When Buhari appointed another Northern Muslim to be Inspector General of Police in January 2019, I wrote a viral post titled “New IGP: Why Progressive Northerners Should be Embarrassed.”

In December 2017, I shared a video that a northern Fulani Muslim secretly sent to me where Buhari thanked Kano people for coming out in large numbers to welcome him and said, “saboda yan kudu su san har yanzu ina da gata.” Rough translation: “… so that Southerners can see how favoured I still am.” I called it an “indefensible, gratuitous dichotomization of the country by a sitting president.”

When I relentlessly exposed and condemned Buhari’s subnationalist utterances and actions, hordes of Christians and southerners praised me to high heavens. But several of them now expect me to look the other way when one of their own is guilty of similar indiscretions.

How do you expect me to respect people like that? How can I resist looking down on such peevishly infantile bozos? And how do you expect me to be bothered by what they write and say about me? You only worry about the negative opinions of people you respect. How can I respect cognitively subnormal fatheads who haven’t outgrown the pediatric emotional stages of their toddler years?

The truth is that Osinbajo is temperamentally incapable of even pretending to be president of all of Nigeria, and has no business vying for one. He is culturally insular, lacks a critical intellect, and has the emotional maturity of a 10-year-old.

He would make a great president for the Pentecostal Republic of Nigeria, though.

*This opinion by Farooq Kperogi was first published 8 April with the title: Why is Osinbajo Running Kitikiti, Running Katakata?