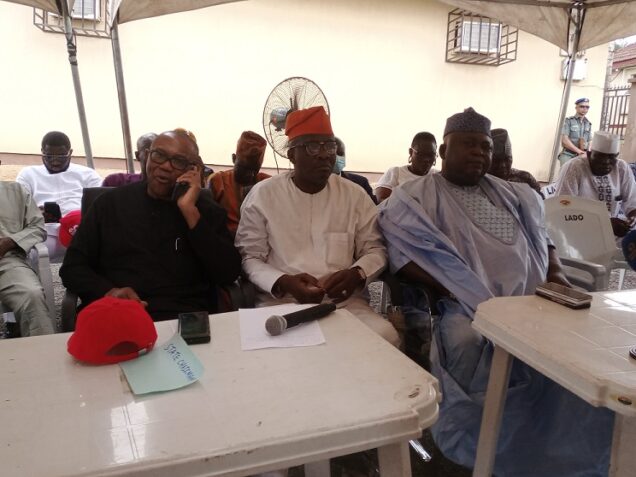 Former Anambra governor, Peter Obi and members of PDP in Ogun State on Monday during which he asked for their support for his 2023 presidential ambition.

Former governor Peter Obi was in Ogun on Monday to seek support of members of the state chapter of Peoples Democratic Party PDP for is 2023 presidential ambition.

Speaking to party members at the secretariat of the party in Abeokuta, the state capital, Obi who was PDP vice-presidential candidate in the 2019 elections, advised Nigerians to put the future of their children into consideration while exercising their franchise in the 2023 general election.

Obi who ask the party members to support him at PDP presidential primaries scheduled for May, also advised Nigerians to do a thorough background check of the candidates coming forward to seek their votes so as not to put the country on another journey of pains and agony.

The Presidential hopeful who regretted the spate of insecurity in the nation under the current administration , arguing that the raging banditry and terrorism in Nigeria resulted from leadership failure of the past

His words, “Do not look at money or what people are saying, let’s change the country. I have seen the pains of people in the North East and North West. All these you hear is our elites and politics leaders conspiracy. Nigerians are one and they love each other.

“There is agitation everywhere. We have banditry, terrorism, these are culmination of leadership failure in Nigeria. Our country never look into the future and the consequences are what we are seeing today Is a failure of not investing in the future. We must act now so that Nigeria will not collapse.

“Our country has 33 percent of unemployment when you add underemployment, it’s about 65 percent and 60 percent of these are youths. Our youths in their productive age are doing nothing. Today out country is owing retirees pensions and gratuities. We must change this situation. Our universities are closed, about 16 million students out of school, unemployment amongst our Youths is the highest in the world.

“Think about the society your children will live, Anybody who comes here and say to you that he wants to be a President, ask, ‘where was he 25 years ago and what has he done, where is he coming from, ask questions about his achievements in the past. Where have you work? Which school did he go to, let us know how he manage public money that was given to him in past.”

In his welcome speech, Ogun PDP Chairman, Alhaji Sikirulai Ogundele lamented the hardship Nigerians have been going through since the All Progressives Congress, APC took to power in 2015.

Also speaking, one of the party’s governorship aspirants, Oladipupo Adebutu, described obi as a credible, outstanding and responsible man capable for the job of Nigerian presidency.

“Peter Obi is very credible, outstanding, responsible and outstanding Presidential aspirant. APC is clueless, aimless. the Minister of Information is even tired of his lying.

He, however, assured Peter Obi of full support of Ogun delegates if he is elected to be the presidential candidate of the party come May.