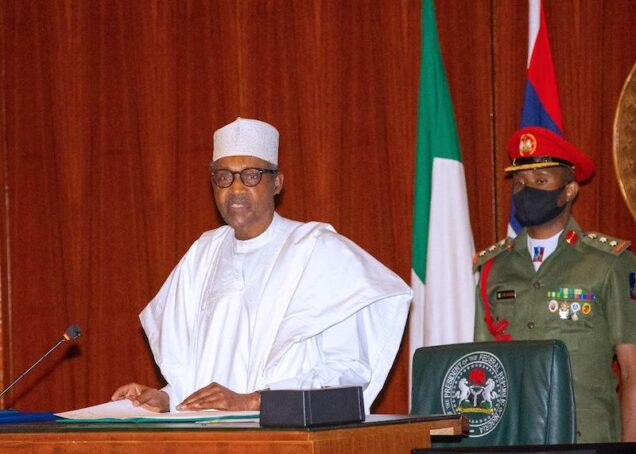 President Muhammadu Buhari has admitted massive theft of crude oil between the production platforms and the terminals, leading to significant production shut-ins and a lower oil production volume.

The revelation was conveyed in a letter to the Senate, in which he seeks some adjustments to the 2022 budget, including raising petrol subsidy to N4 trillion.

The letter dated April 5, was read at plenary by Senate President Ahmad Lawan.

A similar letter was received by the House of Representatives last week.

Nigeria, according to OPEC data, produced an average of 1.352 million barrels of crude a day in March, as against the 1.8m barrels quota approved by OPEC.

Nigeria’s crude oil production, according to the latest OPEC’s oil market report, declined to an average of 1.354 million barrels per day in March 2022.

The report said the figure showed a decrease of 24, 000 barrels per day when compared to the 1.378mb/d produced averagely in the month of February 2022.

The production figure is far less than the benchmark of 1.6m barrels being suggested by Buhari in the letter to the National Assembly.

President Buhari, in the letter, explained that an adjustment to the 2022 budget became imperative in view of new developments in both the global and domestic economies.

Buhari said that the developments were occasioned by spikes in the market price of crude oil, which were a fallout of the Russian-Ukraine war.

“As you are aware, there have been new developments both in the global economy as well as in the domestic economy which have necessitated the revision of the 2022 Fiscal Framework on which the 2022 Budget was based.

“These developments include spikes in the market price of crude oil, aggravated by the Russian-Ukraine war, significantly lower oil production volume due principally to production shut-ins as a result of massive theft of crude oil between the production platforms and the terminals.

“The decision to suspend the removal of Petroleum Motor Spirit (PMS) subsidy at a time when high crude oil prices have elevated the subsidy cost has significantly eroded government revenues”, Buhari said.

He also sought the approval of Senate for an increase in the estimated provision for PMS subsidy for 2022 by N3.557 trillion, from N442.72 billion to N4.00 trillion.

Buhari, emphasised the need for a cut in the provision for Federally funded upstream projects being implemented by N200 billion, from N352.80 billion to N152.80 billion.

He proposed an increase in the projection for Federal Government Independent Revenue by N400 billion; and an additional provision of N182.45 billion to cater for the needs of the Nigerian Police Force.

“Based on the above adjustments, the Federation Account (Main Pool) revenue for the three tiers of government is projected to decline by N2.418 trillion, while FGN’s share from the Account (net of transfer to the Federal Capital Territory and other statutory deductions) is projected to reduce by N1.173 trillion.”

He said that the amount available to fund the federal budget was projected to decline by N772.91 billion due to the increase in the projection for Independent Revenue (Operating Surplus Remittance) by N400 billion.

He explained further that Aggregate Expenditure is projected to increase by N192.52 billion, due to increase in personnel cost by N161.40 billion and other service wide votes by N21.05 billion (both for the Nigeria Police Force), additional domestic debt service provision of N76.13 billion, and net reductions in Statutory Transfers by N66.07 billion.

The President noted that the total budget deficit is projected to increase by N965.42 billion to N7.35 trillion, representing 3.99 per cent of GDP.

According to him, the incremental deficit will be financed by new borrowings from the domestic market.