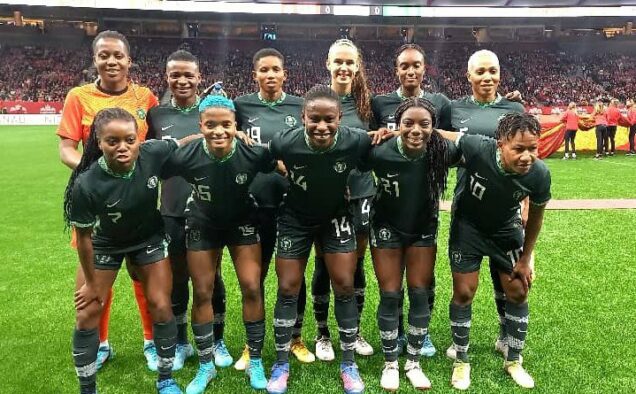 Ifeoma Onumonu and Rasheedat Ajibade made Nigeria proud on Tuesday as the Super Falcons recorded an impressive 2-2 draw against host, Canada, in their second friendly.

Onumonu and Ajibade filled the gap created by Asisat Oshoala’s absence as the Super Falcons took on the sixth-ranked country in the world.

The match was played at the Starlight Stadium, Langford.

The Nigerian side lost the first friendly 0-2 to Canada in Vancouver and aimed for a better showing in the second game.

The Super Falcons started brightly and deservedly went ahead in the fifth minute when Onumonu converted a ball with a back heel near the opponent’s post.

The Randy Waldrum-led Super Falcons held on to the one goal advantage until the end of the first half.

Canada started the second half in earnest and a slip made by Super Falcons captain Onome Ebi, earned the host an equaliser.

Veteran Canadian striker, Christine Sinclair noticed that Nigeria’s goalkeeper was off her line and chipped the ball into the net for her 186th international goal.

Down by a goal in front of their home fans, Canada began to pile pressure on the Super Falcons defence, compelling Waldrum to make a couple of substitutions bringing in fresh legs to help.

Nigeria could not hold to a possible away victory against Canada as Shelina Zadorsky’s 87th minute equaliser, brought the host level again.

The two games against Canada were a huge test for the Super Falcons as they continued to prepare for the 2022 Africa Women Cup of Nations tourney scheduled to hold in Morocco.

The tournament which will hold from July 2 to July 23, will produce African qualifiers to the 2023 FIFA Women’s World Cup.

The top four teams from the Morocco fiesta will qualify for the World Cup in Australia and New Zealand.

Two more teams will advance to the inter-confederation play-offs