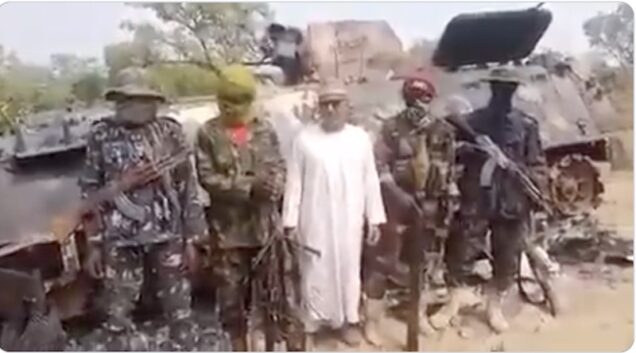 the terrorists with Alwan Hassan of BoA in a video

Terrorists attacking communities in Nigeria´s northwest are partners of Boko Haram and Islamic State of West Africa, already waging a protracted war in the northeast.

The belated admission was made today by Minister of Information, Alhaji Lai Mohammed.

He said the armed gangs and the insurgency groups are in “an unholy handshake.”

It was the first time an official of government was confirming a collaboration that security analysts and even the governors of Kaduna and Niger have warned of.

The result of the alliance is the recent deadly train attack near Abuja, Nigeria´s capital, said the minister.

Explosives were used to blow up the rail track in that attack in which eight passengers were killed and more than 100 were abducted and remain missing.

The Minister of Information, Lai Mohammed, spoke while fielding questions from State House reporters after the Federal Executive Council (FEC) meeting presided over by President Muhammadu Buhari at the Presidential Villa in Abuja.

Mohammed intervened after the Minister of Defence, retired Major General Bashir Salihi Magashi, was asked to provide information on the perpetrators of the train attack.

He said: “What is happening now is that there is a kind of an unholy handshake between bandits and Boko Haram insurgents.

“Preliminary reports of what transpired at the Kaduna train attacks shows that there is a kind of collaboration between the bandits and the dislodged Boko Haram terrorists from the northeast.

“I can tell you very confidently that the Federal Government on the top of this matter.”

The defence minister, in his earlier response to the question, said: “Honestly, I think the security chiefs are working hard to unveil those that are involved, and we will tell you very soon those that are carrying out these attacks.

“Both Jos and Kaduna, we will come and explain to the public what is really going on and our efforts to ensure that all these activities are stopped once and for all.

“We are rarely on top of the situation, we are planning hard and we will get it out as soon as possible.”

On what the government was doing following the 72-hour ultimatum by families of victims on train attack, Mohammed said:

“I think the Honorable Minister of Defense has already addressed the issues. One, that what the federal government is doing won’t be subject matter of a press conference, because we have lives at stake.

“And that the various arms of security are working night and day to unravel the mystery surrounding the kidnap, the attack as a whole, the kidnapped people. What I can assure you is that you get the respective arms of government actually engaged as we speak, in getting those, you know, victims released.

“It’s natural for anybody who is a father or a mother of a kidnap person to be worried and to be concerned.

“But at the level of government, we appreciate that and we are leaving no stone unturned, but we’ll give you specific steps we’re taking I think it will be counter productive and not going to aid or help those who are kidnapped or help you know, the security forces who are tracing and ensuring that there’ll be no repeat of such attacks.”

At least, nine people died, scores sustained injuries while over 60 were kidnapped when terrorists attacked a passenger train over two weeks ago.

Nigeria has been battling violence in its troubled north and an alliance between the two groups could worsen the crisis, analysts told the American news agency, Associated Press.

The security crisis is dominated by two groups: bandits many of whom are formerly Fulani herdsmen now carrying arms and Islamic extremist rebels of the Boko Haram group and its breakaway faction the Islamic State in West Africa Province.

The partnership between the groups “might drive further attacks on innocent civilians and state infrastructure,” said Oluwole Ojewale of the Africa-focused Institute of Security Studies, as the extremists move their insurgency beyond the northeast where they had been largely restricted for many years.

“Adding Boko Haram to the terror problem in the northwest would greatly stretch the security forces to more than its capacity,” said MacHarry.

Nigeria’s security crisis continued Wednesday with the abduction of four female students by an armed gang that attacked their school in northwest Zamfara state and the killing of 23 persons in north central Benue state, local authorities said.

“It is becoming increasingly glaring every day that my people are now an endangered species and so we can no longer wait for help from anywhere,” Benue governor Samuel Ortom said.

He repeated his appeal for residents to be allowed to bear arms to “defend themselves.”

The persistent violence, including the killing of more than 100 villagers in the north central Plateau state during the weekend, has raised further doubts about the Nigerian government’s ability to restore peace in volatile areas despite having declared the armed gangs as terrorist organisations.

The major problem, though, is “the political will and the will to act,” said security analyst MacHarry.

“Boosting the capacity of security services to respond to security crisis is one thing, but actually responding to the crisis is another,” he said.

Responding to such criticisms, Nigeria´s Minister of Defence Bashir Magashi said the government is still in control.

“We are really on top of the situation,” Magashi said.

“We are planning hard and we will get it out as soon as possible.”