How Nigeria can come out of its myriad problems - Emeka Anyaoku 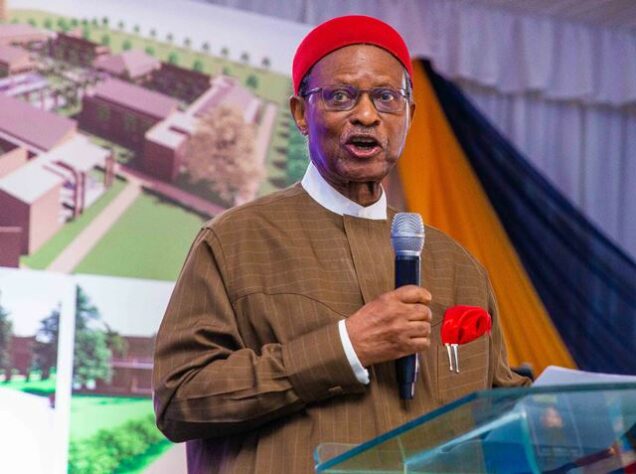 Former Secretary-General of the Commonwealth, Chief Emeka Anyaoku has said the only way Nigeria can solve its myriad problems is for it to revert to true federalism.

Anyaoku made this statement against the backdrop of insecurity, mindless killings and kidnappings currently plaguing the country at the 75th birthday of the Pro- Chancellor of Obafemi Awolowo University, Dr. Yemi Ogunbiyi and the presentation ceremony of his memoirs, ‘The Road Never Forgets’, which held on Thursday, 14 September, 2022 in Lagos.

“In Yemi’s words, Nigeria needs a fresh start, new thinking and a new beginning. My view remains that we cannot begin to successfully deal with our very serious national challenges with the governance system we operate at present.

“With our current federal structure the country will only continue to limp along and be underperforming with the growing threat of a national disaster,” Anyaoku averred.

The astute diplomat and elder statesman then said that in order to achieve political stability, the country needed a true federal system with devolution of powers from the centre to the federating units.

“To achieve political stability and unleash the country’s inherent capabilities, we need a governance system that
Is true federalism with appropriate devolution of powers from the centre to more viable federating units, possibly six, against the current largely non viable 36 units that we have

“The facts I believe are there to show an objective observer that Nigeria, notwithstanding the years when it was held together by military Fiat, began its free decline to its present indisputably perilous state when it abandoned the true federal constitution on the basis of which our founding fathers negotiated our independence.”

Anyaoku also stated without mincing words that the panacea to the nation’s myriad problem lied in the return to a system of government based on the country’s independence constitution.

“We should return to a governance system that is based along the lines of our independence constitution.

“If among other challenges We are to stop the daily killings of innocent people, the latest example being the killing four days ago of over 80 people and the adaption of over 70, burning of several houses inn Plateau State,” he said.

Anyaoku also charged the prospective candidates in the forthcoming 2023 General Elections to commit themselves to the reformulation of the country’s governance system.

He then urged the electorates not to vote for any candidate who refused to pledge to do that.

It was an evening of memories, music and nostalgia. Pupils of the Yemi Ogunbiyi Anglican School, which was named after the celebrant, provided music interludes. Not only did various speakers likened Ogunbiyi’s trajectory to the birth and political growth of Nigeria – in the sense that he was born in Kano by a Yoruba father to an Igbo mother, which he vividly narrated in his memoirs – they all unanimously agree with the fact that that he is a true Nigerian.

Professor Femi Osofisan, poet playwright and scholar who reviewed the book spoke about his longstanding friendship with the celebrant who he chose to call shaft, as he was then known at the University of Ibadan.

He also debunked George Bernard Shaw’s views on biography, saying that Ogunbiyi’s book is an exception to those.