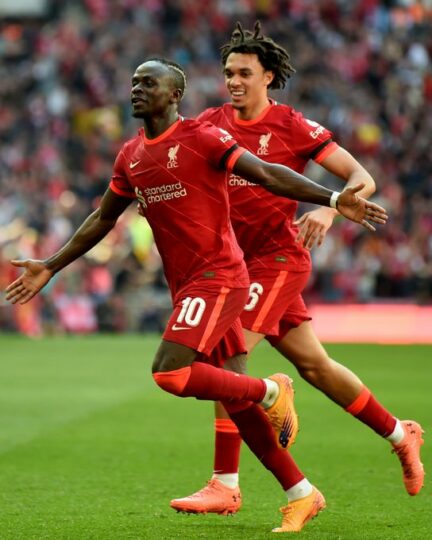 Mane celebrates one of his goals

Liverpool survived Manchester City’s scare to reach FA final on Saturday with a 3-2 victory at the Wembley Stadium.

A depleted City were down by 3-0 in the first half, but got back into the game, scoring two goals in the second half.

Sadio Mane got a brace for Liverpool in the first half, with Ibrahima Konate getting the other goal.

Manchester City manager Pep Guardiola, who was unable to start Kevin de Bruyne and had Kyle Walker out injured, preferred Zack Steffen to Ederson in goal, a move that back-fired spectacularly.

Konate opened scoring on nine minutes with a header. The goal came from Liverpool’s first corner of the game to give the Reds the advantage in the FA Cup semi-final.

A huge mistake by Manchester City’s goalkeeper Zack Steffen, who took far too long on the ball allowed Sadio Mane slides in to poke the ball into the net for the second goal.

Mane could not believe his luck, as it was an absolute gift for Liverpool.

Mane got his brace from a wonderfully worked ball.

The Reds played quick passes on the edge of the area before the ball was poked out wide to Sadio Mane, who volleyed in beautifully.

Jack Grealish pulled one back for City on 47 minutes. It was a great work by Gabriel Jesus, who turned his marker inside the area and then put it on a plate for Grealish to smash it into the roof of the net.

Bernardo Silva got the second goal for City on 90 minutes.

It was a brilliant work from Riyad Mahrez as he got away down the right and into the box. His shot at the near post was kept out by Alisson’s legs but Silva was there to slot into the empty net.

Liverpool held on to win a pulsating encounter and moved into FA final.