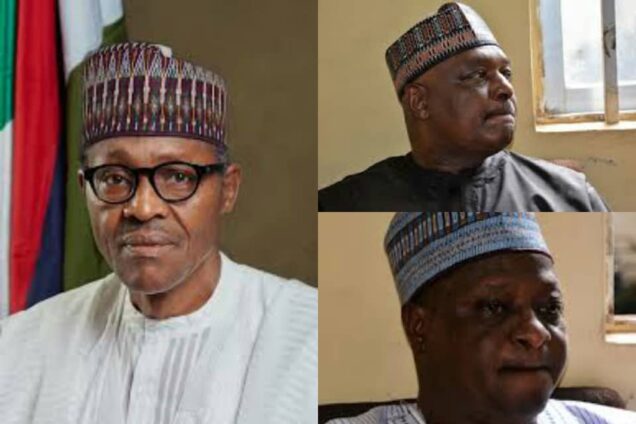 SERAP is also urging him to propose constitutional amendment to the National Assembly to reform the provisions on the exercise of the prerogative of mercy to make the provisions more transparent, and consistent and compatible with Nigeria’s international anti-corruption obligations.

Mr Dariye and Mr Nyame were jailed for stealing N1.16bn and N1.6bn, respectively. However, the National Council of State last week endorsed the pardon of Mr Dariye, Mr Nyame and 157 others serving jail terms following the recommendations of the Presidential Advisory Committee on the Prerogative of Mercy.

In the letter dated 16 April, 2022 and signed by SERAP’s Deputy Director, Kolawole Oluwadare, the organisation said: “Impunity for corruption will continue as long as influential politicians escape justice for their crimes. The constitutional power of prerogative of mercy ought not to be an instrument of impunity.”

SERAP said, “The pardon power ought to be exercised in a manner that is consistent with the Nigerian Constitution 1999 [as amended], particularly the provisions on oath of office by public officers, and section 15[5] which requires your government to abolish all corrupt practices and abuse of power.”

SERAP also said, “Indeed, the presidential pardon power must be exercised in good faith, and in line with the provisions of Chapter 4 of the Nigerian Constitution on fundamental rights.”

According to SERAP, “We would like your government to clarify if the pardon granted to Mr Dariye and Mr Nyame would entitle them to the return of the stolen assets already forfeited to the government.”

SERAP said, “The pardon also constitutes an interference in the exercise of judicial power. Because the pardon appears to be arbitrary, it undermines the authority and independence of the judiciary, and access to justice for victims of corruption.”

“Presidential pardon for corruption cases is inconsistent with the rule of law, and the public interest, as it undermines the principle of equality before the law. It will undermine public confidence in your government’s fight against corruption, and the justice system.

“SERAP is concerned that while the pardon power is routinely exercised to shield influential politicians and politically exposed persons from justice and accountability, ordinary people who have committed petty offences but with no money or influential politicians to speak for them, languish in prisons and are rarely considered for pardon.

“While there is no doubt that Section 175 of the Constitution vests wide discretionary power in the Nigerian president to grant pardon, it does not stipulate the conditions under which such power should be exercised.

“However, when section 15(5) of the Constitution is read together with the oath, it would seem to impose some ethical conditions on you to ensure that the exercise of the discretionary power of prerogative of mercy is not such that it will encourage corruption or impunity of perpetrators.

“Mr Dariye and Mr Nyame should have been allowed to complete their jail terms. The exercise of the presidential pardon in their cases would seem to be unfair and undeserving.

“The investigation and prosecution of the corruption cases involving the pardoned former governors Dariye and Nyame reportedly cost over N300 millions of taxpayers’ money. The cases went from the High Court to the Supreme Court of Nigeria.

“Section 15(5) of the Nigerian Constitution provides that ‘The State shall abolish all corrupt practices and abuse of power.’ Similarly, article 26 of the UN Convention against Corruption requires your government to ensure ‘effective, proportionate and dissuasive sanctions’ in cases of grand corruption.

“Article 26 of the convention complements the more general requirement of article 30, paragraph 1, that sanctions must take into account the gravity of the corruption offences.

“SERAP notes that in your inaugural speech on May 29, 2015 you stated that, ‘We are going to tackle pervasive corruption head on. Nigerians will not regret that they have entrusted national responsibility to us.’

“However, the latest Transparency International’s Corruption Perception Index shows that Nigeria scored 24 out of 100 points, and ranked 154 out of 180 countries surveyed, falling back five places from the rank of 149 in 2020. This places Nigeria as the second most corrupt country in West Africa.

“The pardon power, if properly exercised, can help to protect citizens against possible miscarriage of justice.

“SERAP therefore urges you to urgently withdraw the presidential pardon granted to Mr Dariye and Mr Nyame, and to propose amendment to section 175 of the Nigerian Constitution that will make the exercise of the power to pardon more transparent and consistent and compatible with the country’s international obligations.

“Any proposed amendment should also empower the citizens to challenge the legality of any arbitrary exercise of the power of prerogative of mercy.”