What I want to be remembered for – Ukrainian President, Zelensky 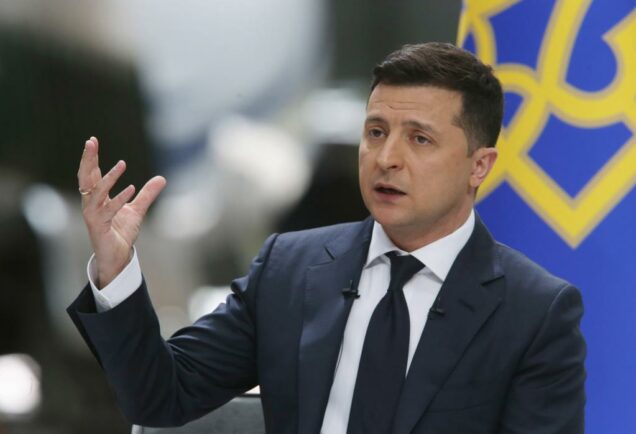 Death indeed stalks the Ukrainian President, Volodymyr Zelensky. Amid the growing threat to his life in the ongoing war between Russia and Ukraine, the embattled President has said he would want to be remembered as a man who loved life to the fullest.

He disclosed this in an exclusive interview with CNN’s Jake Tapper, which was aired on the programme, State of The Union on Sunday 17 April 2022.

Asked what he would want to be remembered for, Zelensky said: “A human being that loved life to the fullest,” he responded. “And loved his family and loved his motherland. Definitely not a hero. I want people to take me as I am. A regular human.”

The comic actor turned Ukrainian President, whose popularity has upped across the globe as a result of the uncommon courage and bravery he has shown since the war started seven weeks ago, also said he knew he was Putin’s number one target and his wife and children number two.

Since the war started, Russian President, Vladimir Putin has branded him a Nazi and terror. He had also branded the war against Russian as a military aggression. Zelensky, on his part, has termed the Russian offensive a genocide, painting a grim picture of the situation in Ukraine.

“I have the same opinion as President Biden,” Zelensky said in the interview. “Look at what happened in Bucha. It’s clear that is not even a war, it’s a genocide. They just killed people. Not soldiers, people. They just shot people in the streets. People were riding bicycles, taking the bus or just walking down the street. There were corpses lining the streets.”

Kyiv, the capital city of Ukraine, where Zelensky still resides and makes his regular broadcast, has been under constant bombardment since the war started and about four million people have fled the city to neighbouring Poland.

Zelensky, who was emotional talking about the death that the war has caused in Ukraine, said: “It is a great pain for me” to see the lives lost.

The Ukrainian President, who lost family in the Holocaust, was asked what he thought about politicians around the world saying “never again” on International Holocaust Remembrance Day, given what’s happening in his country.

“The only belief there is belief in ourselves, in our people, belief in our Armed Forces, and the belief that countries are going to support us not just with their words but with their actions,” Zelensky continued in Ukrainian. “And that’s it. Never again. Really, everybody is talking about this and yet, as you can see, not everyone has got the guts.”

Zelensky said the $800 million in additional funding Biden approved last week to go to Ukraine for new and more advanced weapons was helpful — but more was still needed.

“Of course, we need more. But I am happy that he is helping us now,” Zelensky said. “I feel that right now we are having a cleaner dialogue. It’s been a dialogue that’s had some twists and turns. And not just talk. It’s been very, very difficult because there aren’t many countries that have really helped us.”

The Ukrainian President also said the most important factor was speed to get the weapons needed into the hands of Ukrainian forces. He dismissed some concerns the US and other countries have raised that Ukraine’s soldiers are not trained to use some of the weapons the country is asking for.

“There are people that are offering solutions, but it seems they are just self-serving. So it’s precisely not up to us. “We are prepared to use any type of equipment, but it needs to be delivered very quickly. And we have the ability to learn how to use new equipment. But it needs to come fast,” adding that he’s prepared to engage with Russia diplomatically to try to end the war but that Russia’s attacks on Ukrainians make it harder to do so.

“As I said before, what’s the price of all this? It’s people. The many people who have been killed. And who ends up paying for all of this? It’s Ukraine. Just us.So for us, this is a really great cost. If there is an opportunity to speak, we’ll speak. But to speak only under a Russian ultimatum? It’s then a question about attitude towards us, not about whether the dialogue is ‘good’ or ‘bad.’ It’s impossible,” Zelensky said.