Uzodimma blows hot: Those blaming Buhari behind banditry in Imo 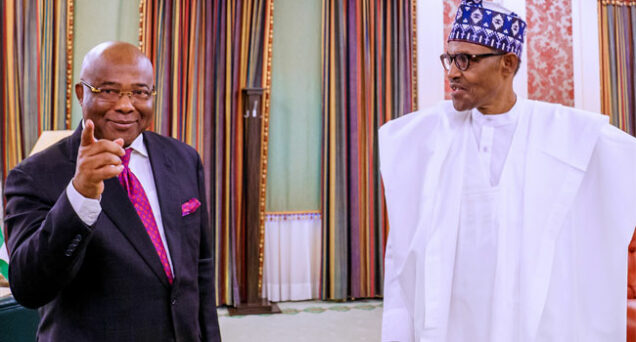 Governor Hope Uzodimma of Imo State has taken exception to the feeling that President Muhammadu Buhari should be blamed over the spate of insecurity in Imo State.

He said those who harbour such thoughts are the ones behind banditry in Imo.

The Governor has also raised the alarm that members of the All Progressives Congress (APC) in Imo State have become targets of attack by the politicians and their collaborators who are behind the banditry and killings.

He spoke on Monday at the wedding ceremony of Chinedu, son of business mogul and politician, Chief Emmanuel Iwuanyanwu, which held at the Cathedral Church of Transfiguration of Our Lord (CATOL), Owerri.

Uzodimma said wicked politicians have decided to hold Imo State captive, killing innocent ones and burning public and private property of Imo citizens, all in the name of politics.

He urged the Church and the congregation to pray for such persons to repent.

Speaking earlier on Sunday while addressing the congregation at St. Rose of Lima Catholic Church in Ozuh Omuma East local government areas of Imo State on Easter Day, Uzodimma reiterated that the killings going on in the State are politically contrived, hence needless for anyone to point fingers at Buhari or himself as instrumental to the wicked act as “some soulless persons” are wont to do.

“I pray that God will touch the hearts of these people who are sponsoring the killing of innocent ones, burning houses and destroying public property in the name of politics.”

To buttress his point that wicked and mindless politicians are behind the killings in Imo, the Governor said it beats the imagination that in the incident which took place at Ogberuru in Orlu last week all the victims – Ward Chairman, Ward Secretary and Woman leader – were of the APC.

“I have cross-checked since the inception of this mindless blood letting in Orlu, Orsu and other communities in the zone, not one Peoples Democratic Party (PDP) person has died, their houses burnt or attacked. It is clear to me therefore that these killings are the handiwork of politicians who are after the APC members,” the Governor said.

He warned that the killings must stop now as his government is neither weak nor lacking in the zeal to deal with the perpetrators except that his administration has zero tolerance for blood letting.

Uzodimma wondered how burning of police stations, local government headquarters and the killing of innocent and hapless citizens could help to advance the course or aspiration of any politician.

Regardless, he enjoined all men of good will, to remain fervent in their prayers for God to touch the heart of both the sponsors of the banditry and their actors/collaborators to come to their senses, particularly in the light of the occasion of Easter when Christians remember the death and resurrection of Jesus Christ.

Uzodimma promised not to betray the confidence reposed in him by Imo people who trusted him with their mandate, reiterating that his administration would pursue policies that would bring joy, prosperity and development to the State.