Why Akinwunmi Adesina is best for Nigeria in 2023 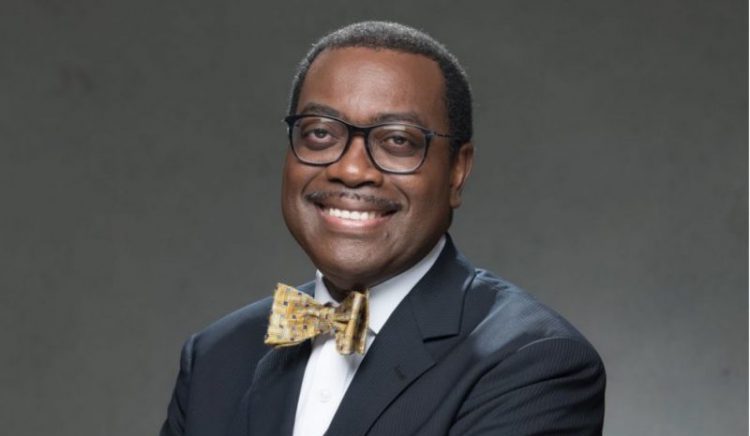 A diaspora group has said that the outstanding performance of Dr. Akinwunmi Adesina as Minister of Agriculture and President, African Development Bank (AfDP) was sufficient for him to join the 2023 presidential race.

The group, known as the Diaspora Support Group of North America and Europe, in a statement on Monday, called on all Nigerians to unitedly demand that Adesina joins the race to become President.

According to the group, President Olusegun Obasanjo, was in a Vanguard publication of May 2, 2021, signalled Adesina as the best person to occupy the office of President of Nigeria come 2023.

“When Dr. Adesina was given the opportunity to serve as Minister of Agriculture and Rural Development (FMARD), he distinguished himself from the pack of ministers and his predecessors as a selfless servant to all Nigerians.

“He worked tirelessly with his team to transform the mindset of millions of smallholder farmers and the youth that ‘agriculture is a business, not a development programme’.

“He advocated policy and institutional reforms that attracted private sector investment commitments of over $5 billion into Nigeria’s Agricultural Transformation Agenda (ATA), they said.

The group recalled that as a minister, Adesina worked with global political and economic leaders to onboard Nigeria’s membership in the“G7 New Alliance for Food Security and Nutrition – Nigeria Cooperation Framework.”

According to the group, this eventually led to the institutionalization of the Nigeria Agribusiness Group comprising 21 Executive Leadership team members.

“Adesina stood against all odds to wipe out what was then considered, before his tenure in office an open secret, the widespread corruption in the fertilizer supply chain through the electronic wallet system, the Growth and Enhancement Support Scheme.

“He added over 20 million tonnes of food to the domestic supply chain and uplifted millions of smallholder farmers out of poverty; we can go on and on,’’ they said.

The group said that after serving Nigeria as a minister, Adesina was now serving his second term as President of the AfDB.

According to the group, this is not without a fight with US President Trump and the Secretary of Treasury on the integrity of his character as the leader of the bank.

The group said that Adesina won the battle with unprecedented support for his re-election coming from all African Presidents, including Nigeria’s former Heads of State.

“Globally, Adesina has enjoyed the recognition of world leaders, including the United States, Canada, France, United Kingdom, and most recently, the United Arab Emirates.

“Adesina has recently engaged with President Joe Biden’s Administration and his top officials, including Vice President Kamala Harris, and the Secretary of Treasury on climate financing among other global economic challenges facing Africa and Africans at home and in the U.S.

“It is, therefore, not surprising, that Obasanjo, a globally recognized leader in domestic and international politics, had gone so far as to beckon on Adesina as one best prepared and fit for the job of the President of Nigeria after the incumbent, President Buhari,’’ they said.

The group added that as Nigeria’s political barometer, Obasanjo’s residence had become a beehive for politicians and political groups seeking his endorsement.

They recalled that Obasanjo had successfully identified and supported the candidacy of the incumbent President Muhammadu Buhari in 2015 and former President Goodluck Ebele Jonathan in 2011.

They also recalled that he identified late President Umaru Musa Yar’Adua in 2007, saying that it can be said that Obasanjo had a knack for knowing a winning horse.

The group said they had examined Obasanjo’s contributions and personal commitment toward a better Nigeria, and Africa and will not be surprised should he endorse Adesina.

“This is one of the many reasons why we, in the Diaspora, are giving support to the efforts being made to co-opt Adesina into the forthcoming presidential race.

“Knowing Adesina, we are sure his presidency would usher in a robust economic resurgence that would, in addition, put an end to our children drowning in the high seas of Africa and Europe in their quest for a better life.

“When elected President of Nigeria, Adesina’s support of the Nigerian youth and the #EndSARS movement was sure to turn our youth into successful entrepreneurs, into the future millionaires and billionaires of Africa through hard work, commitment, and perseverance.

“Adesina would undoubtedly prioritize investments in national and food security, in infrastructure development to secure the lives and property of all Nigerians, in industrialisation, and in human capital development.

“Joblessness of our youths would surely become a thing of the past in Adesina’s presidency; youth and women empowerment in real economic terms must include a safe and secure Nigeria, the One-Nigeria where youths can dream again of a better life without the senseless and cowardly acts of banditry, insurgency, and terrorism.

“The time is now to vote Adesina, President of Nigeria, it’s the right time to deepen and rebuild the social-economic and political foundations of our beloved country.

“Let us all, therefore, now join hands with those who had identified and supported Adesina in Nigeria, at the AfDB, on the world stage, and more, including our very own, President Buhari and all other former Presidents and Heads-of-State of Nigeria, to bring this dream to a reality,’’ they said.

They challenged the electorates to join hands with all detribalised political leaders, to work together and focus on taking advantage of the diversity of tribes, ethnicity, culture, religion, gender, and social-economic class to rebuild a stronger and better Nigeria for all.

“We believe that Adesina is the man of the hour, the altruistic visionary leader with the capacity and leadership attributes required to garner domestic and global support to wipe out insurgency and banditry, terrorism, and senseless killings of innocent Nigerians in our own land.

“Together, let us join hands to once again beckon on Akinwumi Ayodeji Adesina to join the nomination and electioneering process that could lead to his emergence as the next President of Nigeria.