What I discussed with Buhari in Abuja on Imo attack - Uzodimma 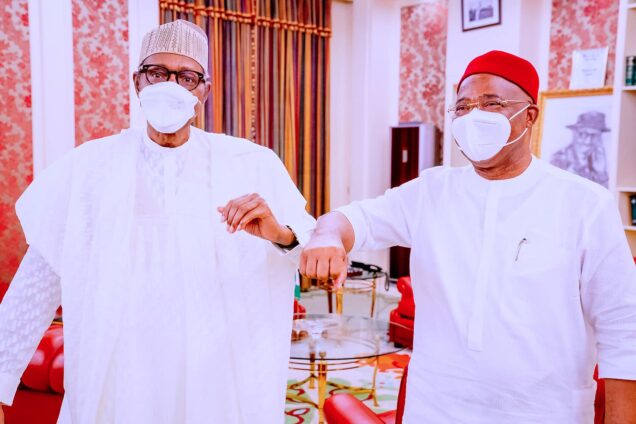 Governor Hope Uzodinma of Imo has updated President Muhammadu Buhari on security situations in the state, including the recent killing of staff of the Independent National Electoral Commission (INEC) by bandits in the state.

The governor, who spoke to State House correspondents after the closed door meeting with the President, said two suspects were apprehended on Monday in connection with the incident.

According to him, the suspects are currently helping the police in their investigation.

The INEC Staff were attacked while carrying out the on-going continuous voter registration exercise on the fateful day.

“Two of the bandits were arrested on Monday and are helping the Nigerian police command in the state , to do a very thorough investigation.

“Until that is done, I will not speak much on that,” he said.

The governor, however, stated that the initial plan of the bandits was not the INEC Staff but the Correctional Centre Facility in Okigwe.

He said on getting the information on that, the state government in collaboration with security agencies fortified security around the centre thus frustrating the bandits, who later vented their anger on the INEC staff.

He said: “The incident that happened, that involved the INEC staff, regrettably, INEC was not the target.

“We had the information that the Correctional Centre Facility in Okigwe was to be attacked by bandits and we caught their conversation so we fortified the facility.

“True to it, the bandits, while approaching Okigwe, saw how fortified the place was and they tried to escape through Ihitte-Uboma , where they ran into INEC staff on continuous voter registration and out of anger and frustration, attacked them. ”

On the insinuation in some quarters that the state government was responsible for some of the attacks in the state and beyond due to internal wrangling within the governing party, Uzodinma dismissed such claims.

According to him, a government in power cannot shoot itself on the foot by causing mayhem.

The governor also dismissed the call by Prof. Afe Babalola that an interim government should be formed at the end of the Buhari administration on May 29, 2023 instead of conducting the general elections.

According to him, the nation constitution does not provide room for the formation of an interim government.

“By May 29, 2023, if there is no elected government, our constitution has not provided for an interregnum. So we shouldn’t give a gap otherwise, you will be creating room for anarchy.

“What will be the process for selecting the interim government because by May 29, the President will not have the constitutional powers to function as a President anymore.

“So, I don’t think we will decide to abandon our constitution and it should be the instrument guiding our actions as a country.

“If there is any opinion that he thinks it is worthy to be canvassed, superior to what is currently in the constitution, such opinion should be taken to the National Assembly and they will through due process, amend our constitution, to factor in such an opinion,” he said.

Uzodinma said he also updated the president on the progress of work on two reconstruction of federal roads located in Imo.

He said he had gotten the president’s approval to work on the roads; Owerri-Orlu and Owerri-Okigwe and the affected roads would be due for inauguration in May.

“The roads are almost 95 per cent completed and by next month, they will all be completed and the president has graciously approved that he will be there to inaugurate them,” he said.