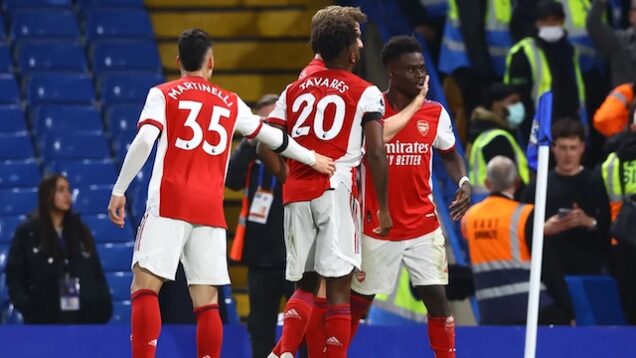 Arsenal revived their push for UEFA Champions League qualification, when they thrashed Chelsea at Stamford Bridge on Wednesday.

After Arsenal twice threw away the lead in the first half, Eddie Nketiah netted for a second time in the 57th minute and Saka converted the penalty in the second minute of stoppage time.

It was the first time Saka had taken a penalty since missing the decisive kick in England’s European Championship final shootout loss to Italy in July 2021, which led to him being targeted with racist abuse.

This time the 20-year-old forward ended Arsenal’s three-match Premier League losing streak to move the team level on points with Tottenham, only behind its north London rival on goal difference.

With six games remaining, the neighbours are still to play each other.

“We wanted to give the fans something to believe in us and we did that. We showed fight and character. It’s a huge result. It means a lot to us. Losing three games in a row is really difficult,” Saka said.

Chelsea, which is five points ahead in third place with a game in hand, had to host Arsenal with about 6,000 seats empty because it was not allowed to sell new tickets for the game under the terms of the sanctioning by the British government of Russian owner Roman Abramovich.

Arsenal took the lead against the run of play as a long ball over the top was not dealt with by Andreas Christensen, whose under-hit backpass was latched onto by Nketiah in the 13th minute for his first league goal of the season.

But Chelsea levelled inside four minutes after Nketiah gave away the ball and Timo Werner’s strike deflected off Granit Xhaka into the net.

Emile Smith Rowe re-established Arsenal’s lead in the 27th with a fine team goal, sweeping home a finish after impressive play from Xhaka and Martin Odegaard.

Chelsea drew level again in the 32nd with Cesar Azpilicueta getting on the end of Mason Mount’s ball into the box.

Chelsea manager Thomas Tuchel reacted to the first-half display by replacing Andreas Christensen with the experienced Thiago Silva in defense.

But Nketiah scored again to send Arsenal in front for a third time in the 57th.

Indecision in the Chelsea defense allowed the striker to nip in and finish low after Nuno Tavares’ cross had not been cleared.

It was Saka being dragged to the ground by Azpilicueta that led to the penalty that sealed the win that consigned Chelsea to three straight home losses in all competitions for the first time since 1993.

The victory at Stamford Bridge gave Arsenal their 250th Premier League away win, and their 709th all-time in the top-flight, second only to Liverpool’s 726.