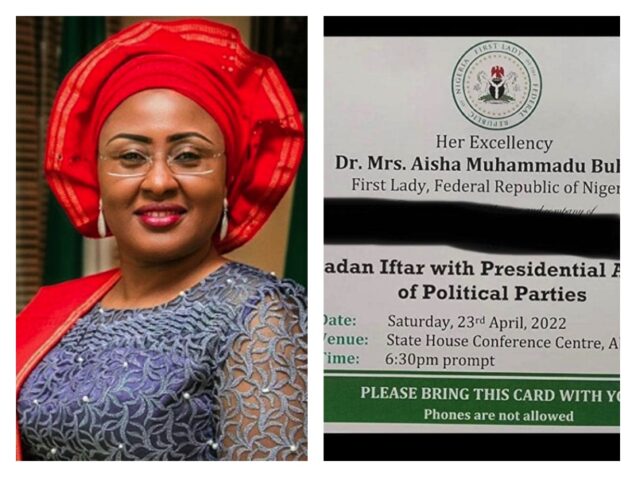 The invitation by Aisha Buhari to Nigeria’s presidential aspirants, asking them to join her for Iftar dinner has run into a storm, as critics question her locus to call the aspirants.

Some critics said it was disrespectful for her to summon Atiku Abubakar, Bola Tinubu and others to dinner on Saturday.

One of the staunch critics is Reno Omokri, who, writing under the Facebook account Build Up Nigeria, condemned the invitation.

“I don’t know about other aspirants, but I can assure Nigerians that Atiku Abubakar will never attend this event, or any other summons issued by Aisha Buhari. Imagine the audacity! Phones are not allowed? Is Aisha herself allowed? Tufiakwa! Nonsense!

“It is only simps, like Osinbajo, Amaechi, and Umahi, that will attend such an event. I seriously doubt that even Bola Tinubu will be unwise enough to attend such. You can just imagine? She is not even talking to them. She is talking AT them. Who are you Aisha? Does your husband even respect?”

But Aisha’s spokesman, Aliyu Abdullahi, who confirmed the invitation, defended the protocol of invitees dropping their phones at the security gate.

Abdullah, in an interview with Daily Trust said it is standard protocol for guests at events in the Villa to drop their phones.

“There is nothing here. This is a standard operational protocol in the Villa when you are having either of the three occupants of the Presidency. If they are coming for an event, this is supposed to be DSS enforced.