A day of reckoning awaits Umahi, others: Wike 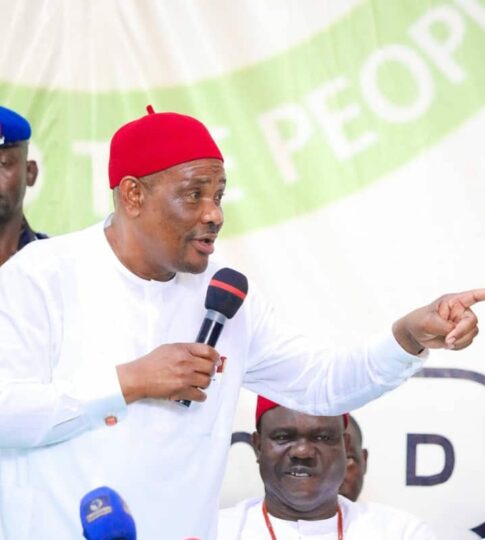 The Governor of Rivers State Nyesom Wike said a day of reckoning awaits Gov. David Umahi and all those who defected from the PDP to the APC.

The Rivers State governor stated this while wooing PDP leaders and delegates in Abakaliki, capital of Ebonyi state on Friday.

Wike advised the Peoples Democratic Party (PDP) not to allow any aspirant who will later defect with the party’s mandate to emerge as its presidential flag bearer.

Wike, who is a PDP presidential aspirant, urged PDP delegates to vote for him during the party’s convention.

The governor said he deserves the ticket because he lacks the propensity to defect with the party’s mandate to another party if he wins the presidential election.

The governor said the advice had become imperative because of the defection of some governors, including that of Ebonyi State, David Umahi, and lawmakers from the PDP to the ruling All Progressives Congress.

He said: “I have never left this party one day. When PDP was in problem, I stood firm and said PDP will not die. Don’t give (a presidential) ticket to the person who will run from the party tomorrow. I am the only person Nigerians know will not run from the party.”

Wike, however, noted that the PDP will continue to fight against injustice meted on it by the defectors in order to strengthen the country’s democracy.

“My colleague David Umahi, wherever you are, wherever you may be, hear me very well. PDP had sleepless nights, PDP won the election, and you took the mandate of our people and go to another party. If you know you are a man and you are very strong, and any day they fix election you will win, I challenge you to resign as governor and contest election whether you will win again.”

The governor urged Ebonyi delegates to support his presidential ambition because he is the only aspirant who has the capacity to defeat the APC in the 2023 presidential election.

Governor Wike reiterated that PDP cannot afford another defeat in the 2023 general election. And to this end, he advised delegates to shun ethnoreligious sentiment and vote for him to pull Nigeria out from the brinks.

The PDP presidential aspirant also lamented the spate of killings across the country.

He declared that if he emerges as the next Nigerian president, he will decisively tackle insurgency, and banditry and grow the national economy.

Governor Wike disclosed that as President of Nigeria, he will encourage women and youths’ active participation in politics.

However, the Enugu State governor, Lawrence Ifeanyi Ugwuanyi, commended the PDP faithful for remaining steadfast despite the recent defection of some members of the party to the APC.

Former Governor of Gombe State, Ibrahim Hassan Dankwambo, told the delegates that Governor Wike has the requisite experience to provide the good governance that the majority of Nigerians are yearning for.

“Governor Nyesom Wike, is the person that is prepared for the job in terms of his training, in terms of his character, his courage, his commitment to the party, and above all, his determination to work with all of you after he becomes the President of this country. He is strong, he has super energy.