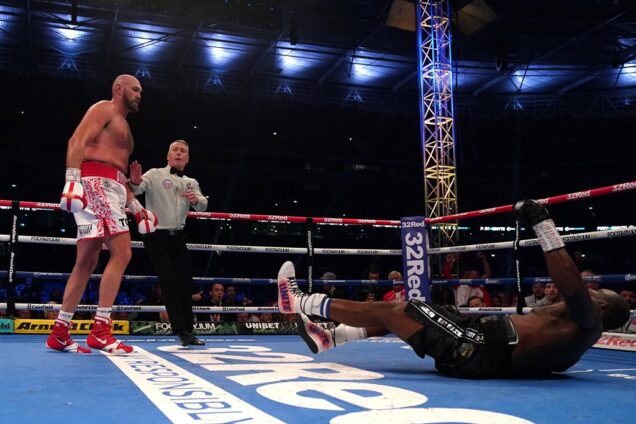 World Boxing Council (WBC) Heavyweight Champion, Tyson Fury has knocked out challenger, Dillian Whyte in the sixth round to retain his belt.

Fury controlled all the rounds in a dominant performance to show that Whyte was no match for his superiority.

A huge right uppercut floored Whyte as The Gypsy King took his professional record to 32 wins and a draw from 33 fights.

Whyte, after receiving that brutal right uppercut, got to his feet, but he is all over the place and referee Mark Lyson waved it off.

In round one, Whyte had come out as a southpaw, but that did not change the game as he got his jab working early on but Fury, the much taller man, landed his first real shot of note halfway through the round and then smoke Whyte in the jaw near the end of it.

Whyte missed with a wild right hand and it was Fury who connected with a couple of decent shots midway through the round as he assumed an element of control.

Whyte continued in round three with his kamikaze style – chucking out lots of punches but not really connecting with anything that really rocked the undefeated champion.

Whyte wobbled after being caught with a shot to the face inside the final minute and even though he clocked Fury in the gut with a late body punch, the champion still has the edge.

In round four, Whyte looked to rough up Fury and Fury was furious that Whyte caught him on the break.

Two shots to the body from Fury saw Whyte with a wild swipe that missed and left him off balance, but Fury could not capitalise on it

With Whyte getting tired, Fury completed the job in round six, knocking his down brutally.