"He was an iconic monarch" - Ooni praises late Alaafin 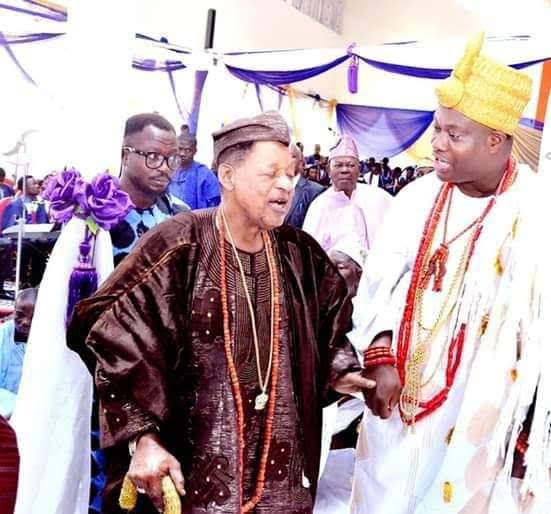 The Arole Oduduwa and Ooni of Ife, Ooni Adeyeye Enitan Ogunwusi Ojaja II, has described the passage of the Alaafin of Oyo, Oba Lamidi Adeyemi III as a loss to the entire Oduduwa race worldwide.

Via a statement by his Director of Media & Public Affairs, Otunba Moses Olafare on Saturday, Ooni Ogunwusi who doubles as the Natural Head of the Oduduwa race worldwide stated that the late Alaafin was a worthy elder whose entire life was dedicated to the promotion of the prestigious Yoruba culture and advancement of humanity.

“We have lost a great icon, a great monarch who saw Oyo through civilization and modern development without jettisoning the cultural sacredness of the throne first occupied by Alaafin Oranmiyan The Great.

“Ile Oodua Palace and the Ooni had a great working relationship with the late Alaafin who gave his best in resolving major conflicts in Yoruba land and uniting all sons and daughters of Oduduwa globally among other landmark achievements.

“The late Alaafin is one of the privileged elders who contributed to the growth of the Federal Republic of Nigeria and also saw the country through military and democratic eras with unquantifiable positive inputs.

Ooni Ogunwusi, the Co-Chairman of the National Council of Traditional Rulers of Nigeria (NCTRN) recalled his last encounter with the late Oyo monarch early last month when they both held a closed-door meeting of peace and reconciliation with some frontline politicians of Yoruba origin at Ibadan where Alaafin made a promise to make his first visit to the Ooni before the middle of this year.

Ooni prayed for the soul of the departed monarch, as well as the family to have the fortitude to bear his death and prayed the Oyo will be spiritually guided to complete the burial of the monarch in full accordance with culture and traditions of their ancestors.

“While the demise of Oba Adeyemi would be greatly missed for his indelible imprint as a great descendant of Oduduwa, the Ooni hereby urges the entire House of Oduduwa worldwide to continue to pray for the deceased’s family and Oyo indigenes at this trying time. May the Almighty Olodumare also be with the OYOMESI at this critical time that may challenge the culture and traditions of their ancestors in the process of burial rites and the process of selecting the next Alaafin.

The position of Alaafin is too culturally important to be handled in a way that undermines our collective traditions and culture.

Olodumare shall solidly stand with the OYOMESI and the entire Oyo kingdom.” The statement noted.