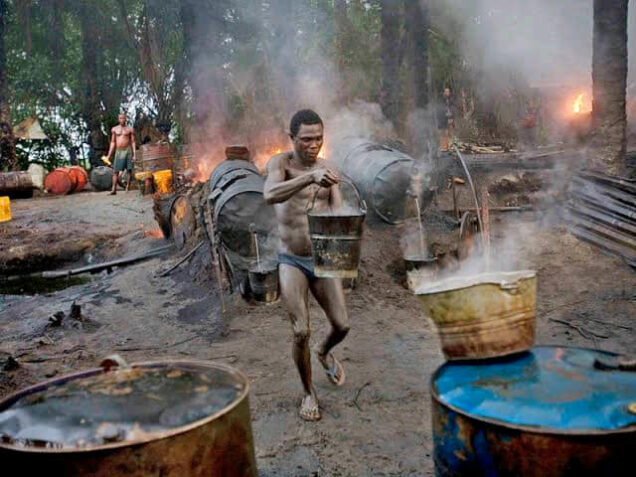 A community leader in Imo state is pissed off with Nigeria’s security agencies after Friday night explosion at an illegal oil bunkering site killed over 100 people.

What, he wondered, are the security checkpoints meant for when they cannot stop crude oil theft or stop trucks lifting illegally refined crude?

“On our way coming, you could count about 34 checkpoints awaiting the illegal bunkerers and traders.

“So, If we have that figure and this illegal bunkering continues on a daily basis, then they have questions to answer,” said Chief Collins Ajie.

Ajie is the President-General of the Supreme Council of Oil and Gas Producing Areas in Imo.

He described the tragedy at the rogue refining site ‘unfortunate’

“It is unfortunate. A tragedy no one dreamt of, where about 108 people got burnt beyond recognition due to illegal oil bunkering.

“The state and Federal Governments should step up efforts to stop this illegal bunkering because it has claimed many lives from Ohaji/Egbema and other Niger Delta areas.

“It’s shocking to see these bodies lying down here. Most of them are bread winners of their families.

“Most of them are young promising people, undergraduates and graduates,” he said.

The community leader noted that the Imo Government had some time ago made efforts to stop this illegal business, but it yielded no fruit.

According to him, some arrests were made, and some trucks and some boats impounded and burnt, yet it had not been able put the situation under control perhaps as a result of the involvement of high calibre individuals in the illegal trade.

He advised the state and Federal Governments to step up efforts in ending the illegal business.

A youth from Abacheke community in Ohaji-Egbema, Mr Desmond Ajie, expressed concern over the inability of community leaders and security agents to end illegal bunkering in the area.

“There is conspiracy of silence by both those who call themselves leaders and security agencies because they failed to arrest this issue.

“It is unfortunate that those with capacity to put an end to this have failed,” he said.

He said youths in the oil-producing communities in the state hardly felt the impact of oil companies which could have reduced illegal oil bunkering.

Mr David Chibuike, who spoke with NAN, came to the site in search of the remains of his elder sister.

“I heard the information about the incident and I had to rush down because my sister, who was married to someone in this community, was involved.

“I came to identify her body but couldn’t recognize her here,” he said while shedding tears.

He also called on government and security agencies to put an end to the illegal bunkering to prevent such huge loss of lives.

A Correspondent of the News Agency of Nigeria (NAN), who visited the site at the boundary between Abacheke and Abezi community in Ohaji/Egbema Local Government Area on Saturday, gathered that the explosion occurred at about 8:00 p.m.

Unidentified burnt bodies littered the area, even as family members were seen moving away the charred remains of their loved ones.