Makinde speaks on death of 3 top Oyo Obas under his govt. 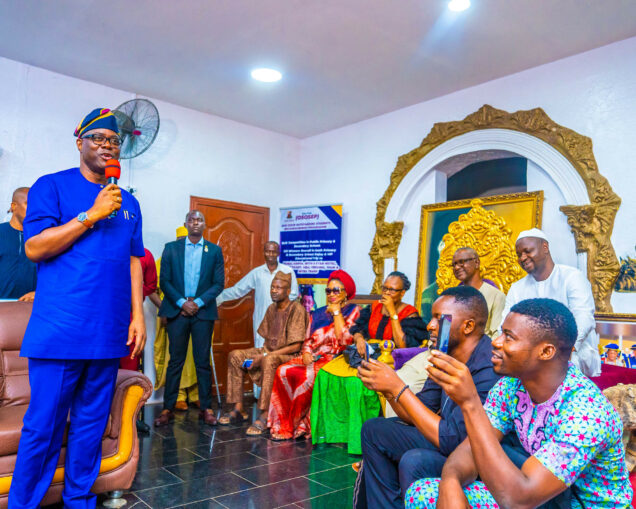 Gov. Seyi Makinde on Sunday reacted to insinuations that three leading traditional rulers have died under his administration in the past five months.

Makinde, jokingly reacted to insinuations about the deaths of the traditional rulers in quick succession when he led top state government functionaries to the Palace of late Alaafin of Oyo, Oba Lamidi Adeyemi who died on Friday, 22, April.

The death of Alaafin was preceded by the passage of Oba Jimoh Oyewunmi of Ogbomoso, on Dec. 12, 2021 and Oba Saliu Adetunji, Olubadan on Jan. 2, 2022

However, while reacting to insinuations about the deaths of the traditional rulers in the social media in a comical manner, Makinde explained that the top three Obas that were ripe in age.

He also said the traditional rulers have impacted on their people and he was not the one responsible for their deaths.

He, however, noted that the late Alaafin lived a fulfilled and impactful life, “not only in Oyo, but throughout Nigeria”.

Makinde, who led top state government functionaries to the Palace of the late Alaafin of Oyo, however, promised to give the late traditional ruler a befitting burial.

According to Makinde, the late traditional ruler lived a fulfilled and impactful life, “not only in Oyo, but throughout the country.”

Makinde said that he had been receiving several calls from notable Nigerians since the departure of Oba Adeyemi, indicating that the late Oba was a great man.

“In Oyo, we have just lost the last human encyclopaedia of our traditional history and his vacuum will be very difficult to fill.

“In fact, I don’t see anybody who can replace this vacuum.

“He was always telling the truth; he bluntly told me in 2015 when aspiring to be governor of the state, that it wasn’t possible at that time, because I didn’t have structure.

“So, he was a kind of personality that would not hide the truth.

“This is a difficult period for us; what we need this time is prayers. I pray that all the good things that baba wished for the state would be fulfilled.

The governor appealed to the Oyo Mesi, the Council of Chiefs and all those that would be involved in the selection of another Alaafin not to delay the process.

Earlier, Bishop Ayo Ladigbolu, on behalf of Oyo Traditional Chiefs, said they were delighted to receive the governor who came to join them in celebrating the late Alaafin.

Ladigbolu said that Adeyemi was “a true incarnation of Atiba, the Grand Great King of Oyo Empire”.

According to him, Oba Adeyemi died the same month Atiba passed away. NAN