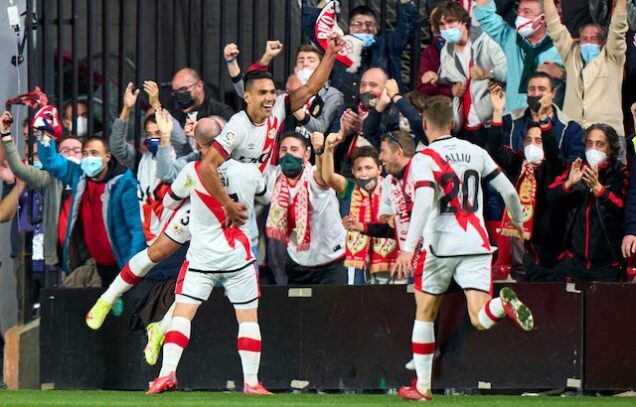 This was a third consecutive home loss for the Catalans, only the second time that FC Barcelona have suffered such a fate in their history.

Alvaro Garcia’s early strike made the difference between the teams.

It means Real Madrid’s lead at the top remains 15 points with five games remaining, putting Los Blancos on the brink of being crowned champions.

That will be confirmed if Carlo Ancelotti’s team avoid defeat to Espanyol next Saturday.

Xavi’s FC Barcelona have also slackened their grip on second place with this setback.

Rayo Vallecano, sitting 14th in LaLiga before their arrival at Camp Nou, snatched a seventh-minute lead.

That was when Garcia made a smart run into space to meet a chipped pass from Isi Palazon and fire sharply into the bottom right corner.

Jordi Alba curled a shot which flicked wide off the post as FC Barcelona chased an equaliser.

Then Gavi wanted a penalty kick when he slumped to the turf under a challenge from Santiago Comesana.

A clever floated shot from Gavi hit the crossbar shortly before half-time, and although Ferran Torres lobbed the ball in from the rebound, he had been in an offside position.

Jordi Alba had a shot deflected over as FC Barcelona pushed early in the second half, but the home side were horribly flat.

Torres and Frenkie de Jong were replaced by Memphis Depay and Nico Gonzalez as Xavi looked to inject some energy.

Depay had a close-range shot blocked by Nikola Maras, and the Dutch striker saw a stinging 20-yard strike punched over the bar by Stole Dimitrievski, but the equaliser would not come.

To some, the result could mean that Barca are on the slide

FC Barcelona had won their last seven home games against Rayo Vallecano in LaLiga, and were seeking eighth in a row against them for the first time in the competition.

But this was poor from them.

This is a bad time of the season to get stuck in a rut.

Camp Nou defeats to Cadiz in LaLiga and Eintracht Frankfurt in the Europa League have been followed by another aberration.

FC Barcelona led the shot count 17-3 in this game but in spite of playing 14 minutes of second-half stoppage time, they could not produce a clinical finish.

Rayo Vallecano, who came up through the Segunda Division play-offs last term, have become the fourth promoted team to win both of their games against FC Barcelona in a LaLiga campaign.

They have also improved their record when leading at half-time in LaLiga this season to Win 8, Draw 1 and Lose 0.

Of all on the night, it was a famous one for Andoni Iraola.

After his team’s 1-0 win at home in October, Iraola has become the first head coach to beat FC Barcelona home and away in his first season in LaLiga.

That is the first since Quique Hernandez for Hercules in the 1996/1997 campaign.

The home win in the autumn was a result that was followed by FC Barcelona sacking Ronald Koeman, leading to Xavi’s appointment.

As for Rayo Vallecano, they are also back on duty next Sunday, hosting Real Sociedad.(dpa/NAN)