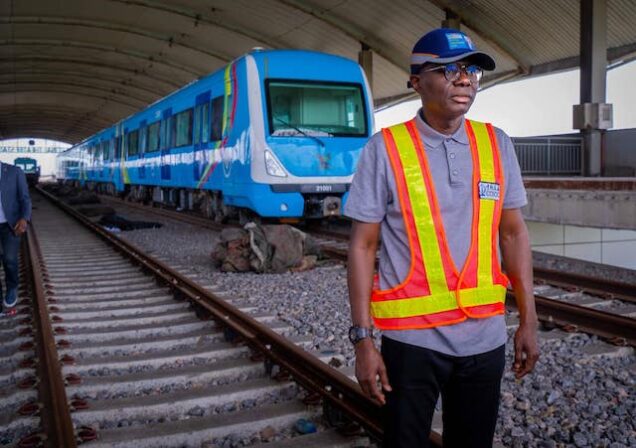 Governor Sanwo-Olu at one of the stations for Blue Line

Governor Babajide Sanwo-Olu has hinted that the Lagos Blue Rail line will be electrified and urged the media to spread the information.

He said this on Sunday, while inspecting both the Blue and Red rail lines in Lagos. Works on the two lines, he said have been 90 percent completed.

“The next major activity that needs to happen on the Blue Line is what we call the third rail. The third rail is the power that will now be activated on this rail track.

“The Blue Line, for emphasis, will be running what we call an EMU. It’s going to be an electric motor vehicle. The trains are going to be running on electric, so they need to have power on the rail tracks.

“We will go back there and fix it and there has to be a lot of enforcement, a lot of advocacy, because by the end of the year, when this track starts, they are electric tracks, they are going to be running on electricity and you will know that citizens or passengers or anybody whatsoever cannot walk on those things.

“So gentlemen of the press, you have that responsibility for now, we’ll begin to mention that, for the next 6 months, 8 months, we need to mention that, that this track, it’s not like the Red Line, the Red Line is DMU, but the Blue Line is EMU. So these are some of the communications that we need to pass out that they are electric train lines”.