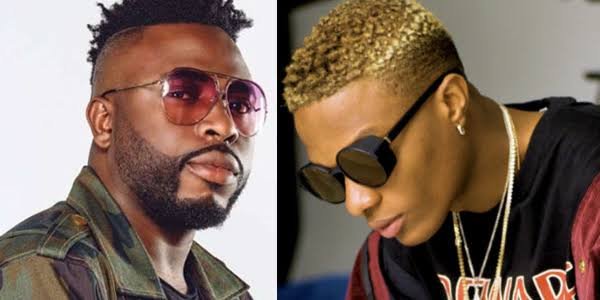 Samklef has turned his attention to Wikzid to demand royalties for the hit song ‘Pakurumo’, which was recorded when the singer was with EME.

Samklef, who produced the song, goes after Wizkid after EME record label boss Banky W denied being a part of a royalty split sheet which Samklef presented as evidence.

Samklef had earlier accused Banky W of instructing Wizkid to remove his name from the sheet.

In the royalty split sheet shared by Samklef, the composers of the song were written as Wizkid and one Steve Michaels.

Samklef had claimed that his name was replaced with that of Steve Michaels and has questioned Banky W’s involvement in the matter.

Banky W, however, made it clear to Samklef that he didn’t know who Steve Michaels was and also had no gain in the royalties as his name and EME were absent from the sheet.

In his latest post, Samklef shared a screenshot of his conversation with Banky W where the latter asked Samklef to take up his royalty claims with Wizkid and Sony, whom Wizkid signed a contract with after leaving EME.

Banky W told Samklef, “I don’t know who that is, guy! Wiz submitted the royalty split sheet himself. That’s why you don’t see me or EME there anywhere.

“You need to take this up with Wiz/Sony/whoever else is listed. I’ve never ever taken a dime from this or been in control of them. It’s all people from their side who are administering it.

“EME has absolutely zero involvement/control/influence there. We are not involved. The people who are, are listed on the royalty splits. Direct your anger at them, not me.”

Speaking on the matter on Tuesday night, Samklef urged Wizkid to come forward and settle the matter with him amicably.

“Dear wizkidayo, remember we where brothers b4 anything @bankywellington say u Comot (said you removed) my name from pakurumo publishing and also know about all my 11 years royalties. And na u give @sonymusic. @sonymusicafrica
let’s fix this in peace. Him say make Pour my anger to u.”