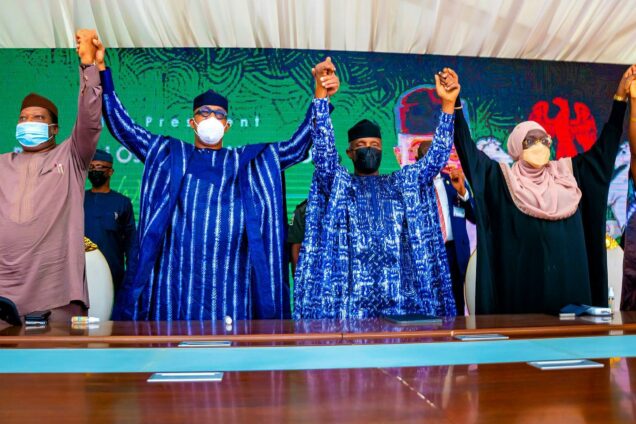 Governor Dapo Abiodun of Ogun State has thrown his weight behind the presidential ambition of Vice President Yemi Osinbajo.

Abiodun declared his support for Osinbajo on Tuesday during the Vice President’s consultation visit with key personalities and party delegates in Ogun State ahead of next month’s presidential primaries.

During a meeting with Osinbajo at the Presidential Lodge, Ibara, Abeokuta, the governor said the vice president is “eminently qualified” to lead the country.

Abiodun said the delegates from Ogun State would support Mr. Osinbajo to enable him “to continue with some of the laudable projects of the President Muhammadu Buhari-led administration.”

He said: “The vice president’s presence here is a homecoming.

“We are pleased with his decision to run for the office of the president. He is competent and committed to leading the country in a higher capacity.

“Your steadfastness, integrity, and character are all well known. You are serving this country and the president meritoriously for the last seven years as the vice president.

“We have no doubt that you will do well as the president and we will support you.”

The governor, who extolled the VP’s academic exploits, recalled how he stood behind his gubernatorial election and described him as a man who is interested in fairness, justice, equity and the rule of law.

However, Mr. Abiodun’s declaration for the vice president deals an apparent blow to Bola Tinubu, another APC presidential aspirant.

Tinubu had met 12 governors elected on the platform of the party in Abuja on April 11, 2022, to solicit support for his ambition.

Gov. Abiodun was in attendance and also took a group picture with Tinubu.

However, where Abiodun’s allegiance lies is now known as he openly lifted the hands of Osinbajo in Ogun yesterday.