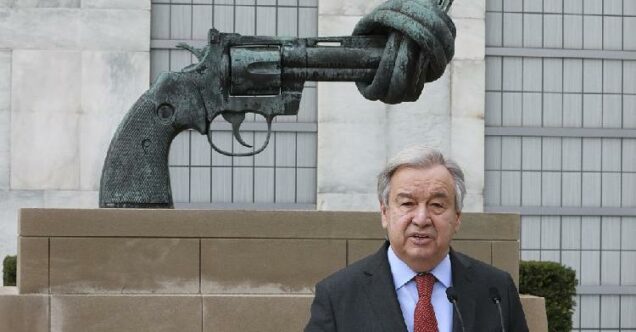 UN Secretary-General António Guterres has called on the Russian leadership to end the war in Ukraine and to allow the UN to help evacuate people from the besieged city of Mariupol.

Guterres made the call during a visit to Moscow on Tuesday. He met President Vladimir Putin.

“It is my deep conviction that the sooner we end this war, the better,” Guterres told reporters after an hours-long discussion with Foreign Minister Sergei Lavrov before meeting later with Putin.

It was Guterres’ first visit to Russia since the war broke out in late February.

He will visit Kiev later in the week.

As the war grinds into its third month and the human suffering escalates, there has been growing criticism that the 72-year-old should take a more active role in ending the fighting.

Guterres said Moscow has repeatedly laid out its “many grievances” about the international community.

Lavrov, who was standing next to Guterres, replied amiably: “I can confirm that.”

Guterres said that the conflict had sent “shock waves” around the world, including on food and energy prices, and that reports of “possible war crimes” needed to be independently investigated.

But his focus was largely on resolving humanitarian problems in Ukraine.

He proposed the formation of a trilateral group consisting of representatives of the UN, Kiev and Moscow. This contact group could ensure the safety of civilian escape corridors, Guterres said.

“The United Nations is ready to fully mobilize its human and logistical resources to help save lives in Mariupol,” Guterres said, referring the south-eastern port city that has been the scene of some of the war’s worst violence.

Putin “agreed, in principle” to such an arrangement for the Azovstal plant in Mariupol, Guterres’ spokesman said after the one-hour meeting.

The Azovstal steelworks represents the last stand of Ukrainian defenders in Mariupol. Civilians are holed up at the sprawling complex along with fighters.

Portions of the meeting were broadcast on Russian television.

State media showed images of Guterres and Putin sitting at either end of the same large white oval table in the Senate Palace that the Kremlin leader has frequently held face-to-face talks with visiting foreign leaders at.

“There is no fighting there, it is over,” Putin said of Mariupol to Guterres.

He claimed that Ukrainian troops were using civilians in Mariupol as human shields.

Putin declared last week that Mariupol has been “liberated,” despite the fighters holding out at the steel plant.

Putin also commented on the status of the stalled negotiations between Moscow and Kiev.

First, a “breakthrough” had been achieved during talks in Turkey a about a month ago, he said.

Then the discussions were derailed by Ukraine changing its position after the “provocation in Bucha.”

Hundreds of bodies were found in the suburb of the capital Kiev after the withdrawal of Russian troops. Ukraine and Western capitals spoke of a massacre of civilians and accused Russia of war crimes.

“The Russian army has nothing to do with it,” Putin claimed again, refusing to acknowledge the many witnesses, journalists, forensic experts and Western politicians who had seen the crimes for themselves in Bucha.

Earlier Foreign Minister Lavrov accused Kiev of not seriously pursuing negotiations and said Western arm deliveries were putting a cessation of hostilities further out of reach.

With regard to the United States, Lavrov criticized Washington for now only being concerned with defeating Russia – and creating a world in which only one country dictates the rules.

Guterres replied that the United Nations stood for a multipolar world, which Russia also desires.

After his visit to Russia, the UN secretary-general is due to travel via Poland to Ukraine, where he plans to meet President Volodymyr Zelensky on Thursday.