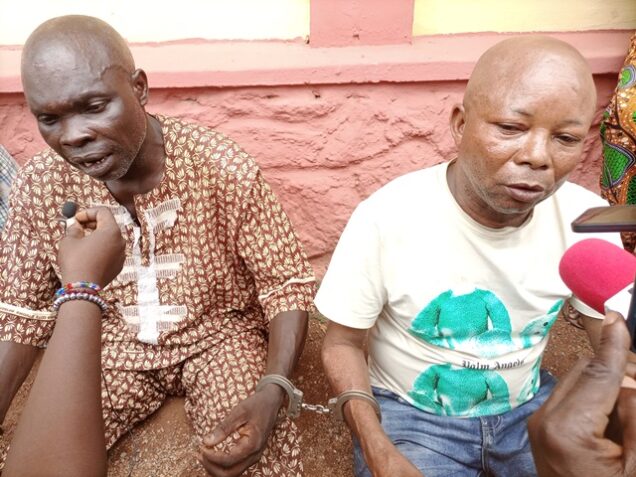 The of the suspects arrested

The Ogun State Police Command has arrested a suspected ritualist, Lukman Kushimo a.k.a Werepe with the severed head of a child hidden in a sack.

The command also paraded 68 other suspects arrested in different parts of the State.

The police command during a parade held at the police headquarter Eleweran, Abeokuta by the Police Public Relation Officer DSP Abimbola Oyeyemi revealed that the suspects were arrested for different crimes across the state in which 52 of them were cultist, 12 kidnappers, 2 armed robbers, a ritualist, murder suspects, and a fraudster.

While speaking with journalists, Oyeyemi revealed that on the 26th of April 2022, at about 6:30 am, while the men of So-Safe Corps were on routine patrol at Lantoro area of Abeokuta, a man later identified as Lukman Kushimo a.k.a Werepe was seen coming out from Oke-Yidi Cemetery with a sack in his hand.

He said the Corps stopped him and that when searched, the head of a little child was discovered inside the sack he carried.

“Preliminary investigation revealed that the little child’s corpse was brought to the Cemetery for burial through the help of the suspect who later came back to sever the head,” he said.

Lukman told journalists that the parents of the girl, who are based in Ibadan brought the girl to him to help bury her in the cemetery on their way from the Federal Medical Center (FMC) after battling Kidney disease, which he collected the sum of N29,000, but that when his accomplice called him that they would need ‘biscuit’ (i.e Human head), he decided to cut off the girl’s head with the mindset of collecting N50,000 from Aworila.

Another paraded suspect was an Islamic clergyman Abdul Salami Yakub who specializes in defrauding unsuspecting members of the public.

Oyeyemi revealed that Yakub was arrested following a written petition received by the Commissioner of Police from one Rukayat Ibrahim who reported that she was defrauded of N4,775,000 by Yakub who pretended to have a spiritual solution to her daughter’s problem.

The Commissioner of Police, however, directed the monitoring team to go after the suspect who was eventually arrested and confessed to being a fraudster.

While the investigation was going on, another victim, Oluwaseun Ibrahim came up with a complaint that the suspect had earlier duped her of N700,000, which the suspect also confirmed.

Also Alamu Apesin, a well digger stabbed Joshua Alao in the right chest during a fight over dating his girlfriend.

The police command however appreciated the citizens of the State for their crucial and timely information.

Oyeyemi also assured the residents that the command would never abdicate its statutory responsibility of fighting crime and criminality in the State, and also assured all citizens of Ogun State that its operatives were ever ready to rid the State of all criminally minded persons.