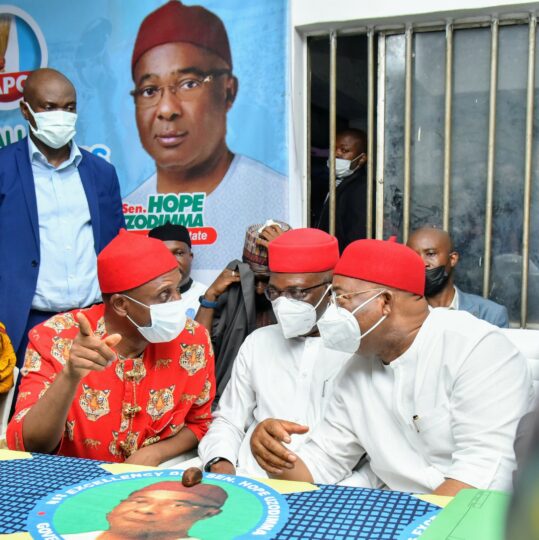 Governor of Imo State, Sen. Hope Uzodimma has told the Minister of Transportation and an All Progressives Congress (APC) presidential aspirant, Chibuike Rotimi Amaechi, that there is a new spirit in the southeast zone of the party that will make winning an election in 2023 easy.

Governor Uzodimma made the disclosure on Tuesday at the Imo State APC Secretariat on Okigwe Road Owerri when Amaechi came to interface with the Party’s delegates from the five states of the South East ahead of the presidential primaries.

Addressing the APC faithful and delegates who converged to join the Governor receive Amaechi, Governor Uzodimma said that “there is a new spirit in the South East of APC which is the product of serious efforts in political engineering to make the party what it is today.”

The Governor noted that APC in the South East is now united and determined to win all the coming elections.

Governor Uzodimma said the message to Nigerians from the South East APC is that “we want to win because we are already doing well and we will win because we cannot afford not to win.”

The Governor told Amaechi and the APC faithful that South East will continue to show Nigerians that they are united.

He reminded the Amaechi that the APC in the southeast has no problem with him as a brother contesting the presidential election even though there are other aspirants from the zone who are also members of the Party.

Governor Uzodimma said one that is obvious is that President Muhammadu Buhari is a leader with conscience and will not disappoint Ndigbo.

He wished Amaechi well and prayed to God to give them the courage to know how to go about their winnings, noting that the South East is determined to go into the presidential election and win.

Addressing the APC delegates, Amaechi said he was in the South East with his entourage to seek the members’ support for his aspiration to become the President of Nigeria, noting that once he is given the opportunity, he will “honestly use it for the good of all Nigerians.”

He said he is not an Igbo, Yoruba, Ikwere, Hausa-Fulani, or any sectional aspirant rather “a Nigerian aspirant” who, if he wins “will be sincere to the people” and will do his best to “protect the Igbos, Hausa-Fulanis, Yorubas or any other ethnic group in Nigeria.”