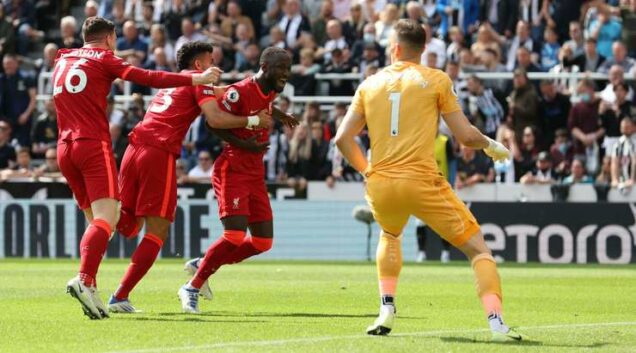 Keita celebrates his goal for Liverpool

Liverpool leapfrog Manchester City to the top of the English Premier League after Naby Keita’s lone strike against Newcastle on Saturday.

City may take over from Liverpool again today if they win their match against Leeds United.

Naby Keita’s 19th-minute strike was all that Liverpool needed to end Newcastle’s resurgence and move to the summit of EPL.

Keita had acres of space after latching on to a precise pass into the box. He did not hesitate to release a low effort which ended up in the middle of the net.

On 34 minutes, Sadio Mane fashioned a shot from the edge of the box after receiving an accurate pass. Martin Dubravka made a stunning save to stop the effort from flying into the bottom left corner.

Miguel Almiron seemed to have levelled for Newcastle on 39 minutes after he put the ball in the net but the referee disallowed the goal due to offside.
Three minutes later, Diogo Jota rose above the defenders and placed a towering header towards the roof of the net, but Martin Dubravka was prepared and leapt to thwart him.
On 63 minutes, Mane was the first to react to a loose pass inside the box, but sliced his shot just wide off the right post.
Jota, on 73 minutes received a precise low pass inside the box, controlled the ball and released it towards the right post. Unfortunately for him, Martin Dubravka made a great save to stop his effort.
Tags:   Liverpool   Naby Keita   Newcastle