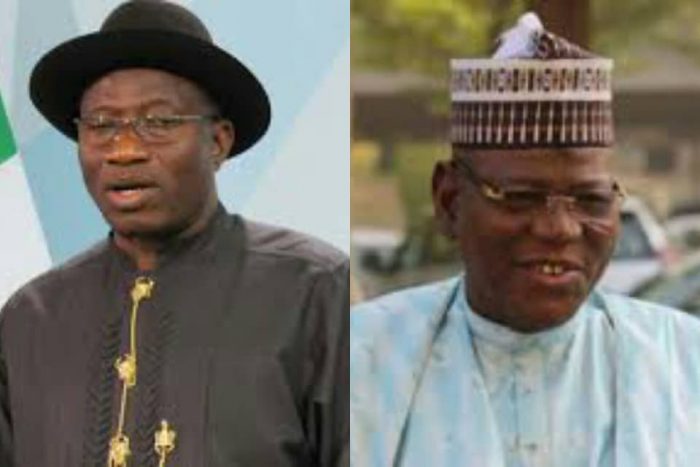 Former Governor of Jigawa State and chieftain of Peoples Democratic Party, PDP, Sule Lamido has warned former President Goodluck Jonathan that he risked wrath of God if he succumbed to ongoing overtures that he should join the ruling All Progressives Congress, APC.

The former governor said this while reacting to the speculations that Jonathan who lost to APC as president elected on the platform of PDP in 2025 may defect to APC in order to run as the presidential candidate of the party in 2023.

Groups of different hues had in the past two weeks sprang up across the country with the purpose of dragging the former President into the 2023 presidential race. This followed Jonathan’s refusal to out rightly reject calls by a group to join the 2023 race during a visit to his office in Abuja about three weeks ago.

Jonathan had given hint that he may join the presidential race when he said: “I cannot declare because some processes are still ongoing. Yes, you are calling me to come and declare for the next election. I cannot tell you I’m declaring, the political process is ongoing. Just watch out.”

Encouraged by the prevarication, other groups had come up, with one of them giving Jonathan a 7-day deadline to join the APC in his ward in his Bayelsa home state with the ultimate aim of seeking a return to Aso rock on the platform of the party.

But reacting to such calls, Lamido in an interview with Vanguard newspaper asked Jonathan to consider the suffering of PDP members who stood by him during the 2015 campaign before deciding to join the ruling party.

The former Jiagawa State Governor said he and other PDP members in the North were persecuted by members of APC and suffered loses because they supported Jonathan in the 2015 election.

He also asked the former President to consider how was persecuted by members of APC ahead of the 2015 election.

“That means all they went through, the pain, the humiliation, for supporting Jonathan in 2014 was nothing. Even Jega (then-INEC Chairman) was not left out. We went through hell in 2014 all for Jonathan. He called me during the election in Jigawa. I said “sir”, he said “I hope you are safe”. I said “don’t worry sir. We are home and dry”. He said “thank God”.

“Even though Buhari won in my state (Jigawa), in the polling units in my ward, he scored zero. I am taking the pain of this narration that Nigerians suffered a lot for Jonathan. And God has been good to Jonathan.

“It is for him now to reflect and see those people who demonized him, who called him evil, who said Boko Haram was PDP company in 2014. Buhari with APC members went on demonstration because fuel price was increased to 60-something naira. He (Buhari) was on the streets demonstrating.

“I knew the kind of humiliation he went through. How he lost the election through blackmail, threat and division between tribes and Christians and Muslims. I met him in the Presidential Villa four days after Buhari won the (2014) election. What I told him in the Villa is for another day. I won’t say that now. He should remember what I told him. He should take all this into consideration. Is this the way he wants to reward PDP? Is this way he is going to reward PDP for inventing him? Minus PDP, who will ever know anybody called Jonathan? Today, he is an international person, being called upon by the world to perform functions for the world.

How did he get that kind of status? It is from PDP. Now, he is said to be going to APC because of greed, to destroy all this history of his? God will not allow him. If he goes, God will defend PDP.

“If he goes, he will meet the wrath of God. I urge him not to do it. The people courting him now are liars. They lied to get to government. I urge him in the name of God, the very God that made him from nothing, to think about PDP which made him from nothing. He should please reconsider. People are looking at him. You do not destroy the foundation that made you. These people ‘evilized’ him. He is now going to them, to turn him into saint? He should never ever believe in APC. APC is a creation of lies, cultured by lies, maintained with lies.