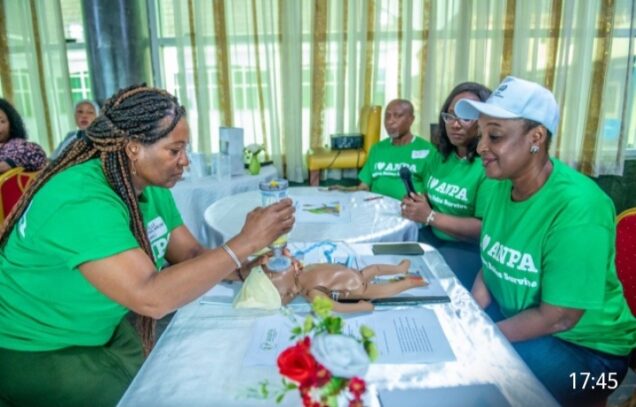 Worried over the high rate of infant mortality in Nigeria, wife of Edo State Governor, Betsy Obaseki weekend flagged off the ‘Help Baby Survive’ an initiative aimed at reducing the incidence of maternal and child mortality in the state.

The initiative is a joint effort of Edo State Government and the Association of Nigerian Physicians in the Americas (ANPA), in collaboration with the Edo First Lady’s ‘Make No Pikin Die’ initiative.

As part of the new campaign, the state government is training health personnel from all medical facilities in the state to equip them with specialised knowledge to tackle neonatal deaths.

Declaring the programme open, Mrs. Obaseki who noted that Nigeria is second in terms of the high rate of child death or neonatal mortality in the world, after India, added that the programme will help change the narrative.

She said: “This statistics and data has prompted me to commit to the fight against the scourge, starting from Edo State.

“The ANPA medical mission addressed indigent people in the state; those who can’t afford the care they deserve.

“The treatment is from world-class doctors from America and costs millions of naira. The free medical mission is not for the politicians or rich people but for the poor as the value is unquantifiable.

“The focus is for the poor and we insisted it must be at the grassroots and three PHCs in Benin. The medical mission is a life changer for Edo people as the Governor Godwin Obaseki-led administration has put in place machinery to make Edo the new medical tourism destination.”

The Edo First Lady charged doctors, nurses and other health personnel at the training to put into practice all the learnt at the sessions.

According to her, “It’s expected that they use the skills they get from the training to impact positively and help tackle the issue of neonatal death in the state. This death is prevalent in rural areas and there is a need to put it under check.”

“We are doing a lot to change our state and country, approaching it through healthcare. Aside from this, we also have a VVF center where we carry out free surgeries for affected people who cannot afford such care.”

One of the facilitators of the training, Dr. Chinyere Ayaoyu, commended the state government for the programme.

She noted that the ‘Help Babies Survive’ model is an evidence-based programme that if properly-enacted, it will cut neonatal mortality rate by 50 percent.

According to her, “Helping babies to breathe includes essential care for every baby. We decided to include this programme to the ANPA week and work aggressively to address the issue and train the trainers who will train others to positively impact and address neonatal mortality rate in the state. We have brought experts on board that will help us impact and drastically reduce the incidence.”

On his part, President of ANPA, Dr. Christopher Okunseri, said: “Life starts from childhood as we can’t just focus on adults alone, but also include children. This is part of our strategic process.”