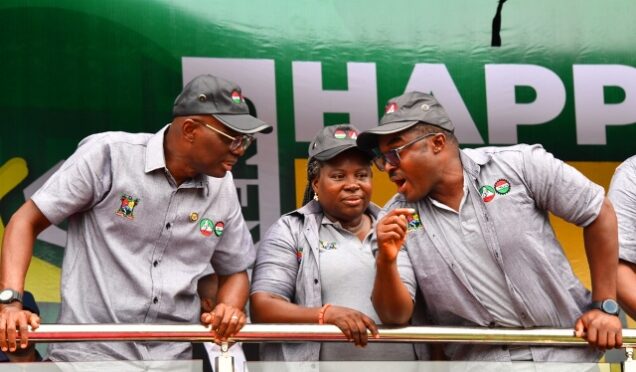 Lagos State Chairman of the Nigerian Labour Congress (NLC), Comrade Funmilayo Sessi and her Trade Union Congress (TUC) counterpart, Comrade Olugbenga Ekundayo, along with leaders of trade union organisations endorsed Sanwo-Olu on behalf of millions of informal and formal workers in the State during the International Workers’ Day held at Mobolaji Johnson Arena, Onikan on Sunday.

They said they decided to support Sanwo-Olu’s re-election because he is a worker-friendly governor and has performed very well to deliver on his campaign promises in line with the administration’s THEMES developmental agenda.

The workers, through different unions affirmed their support and determination to return Governor Sanwo-Olu during the 2023 gubernatorial elections, displaying signs of 4 + 4 by raising four fingers with both hands during their march past, shouting “4 + 4,” “Sanwo-Olu lekan si” and “Sanwo-Olu for second term,” among other slogans.

The NLC chairman, Comrade Sessi said Lagos workers decided to endorse Sanwo-Olu for a second term because he has performed beyond expectation, considering his remarkable achievements in different sectors in the State.

She said: “On behalf of the workers in Lagos who represent more than 50 per cent of the voting population, we hereby support your second term in office. We the workers are supporting you because you are the hope of the masses. Workers in Lagos stand with you.

“During the COVID-19 pandemic, you did not sack workers and even gave palliatives. Even after the pandemic, you are still employing workers. You were also prompt in paying salaries. This is not like that other states. Therefore, anywhere you go, we shall stand with you.”

The labour leaders thanked Sanwo-Olu for fulfilling some of the promises made to the workers last year, among which were the allocation of land for the building of the secretariat of Lagos State chapters of NLC and TUC; donation of 17 official vehicles to unions and allocation of 10 hectares of land at Idera, in Ibeju-Lekki and Akarakumo in Badagry, for the construction of Workers Villages, to which members will be able to subscribe through pocket-friendly mortgage schemes.

Sanwo-Olu, during the event presented the title documents of a parcel of land of sufficient size in the Alausa Central Business District on which the NLC and TUC will build befitting Lagos State headquarters.

Sanwo-Olu, who commended the workers for their contributions to the development of Lagos State and Nigeria at large, said his administration’s development agenda is anchored on the existence of a skilful, productive, competitive and adaptive human resource base.

“To this end, we will shortly be ensuring that a twelve-member delegation drawn from our Labour leaders and the Lagos State Government attends the forthcoming International Labour Organisation (ILO) Convention in Geneva, to further expose them to international best labour practices,” he promised the workers.

Speaking on the theme of the Year 2022 Workers Day celebration, “Labour politics and new quest for good governance and development in Nigeria,” the Governor urged them to continue to support the government to deliver the dividends of democracy.

“As we begin preparations for the next general elections, in our State and the country at large, we must keep in mind the robust growth and progress of the last two decades and rededicate ourselves to building the future of our dreams.”

Lagos State Head of Service, Mr Hakeem Muri-Okunola in his goodwill message, commended Governor Sanwo-Olu for providing enabling environment for the growth and development of workers in the state.

Muri-Okunola, who was represented by the Permanent Secretary, Office of Local Government Establishments, Training and Pensions, Abiodun Bamgboye, said the government had continued to embark on a series of projects to meet the needs of workers in the state.

Also speaking at the event, Lagos State Commissioner for Establishments, Training and Pensions, Ajibola Ponle, who saluted retirees and the workers for their dedication, resilience and commitment to excellent service delivery to the state, said the present administration placed a lot of premium on the welfare of workers.

The Minister of Labour and Productivity, Senator Chris Ngige, who was represented by the Controller of Labour, Nnamdi Enuah, said the role of labour is pivotal to national development and therefore urged workers to continue to support federal and state governments.