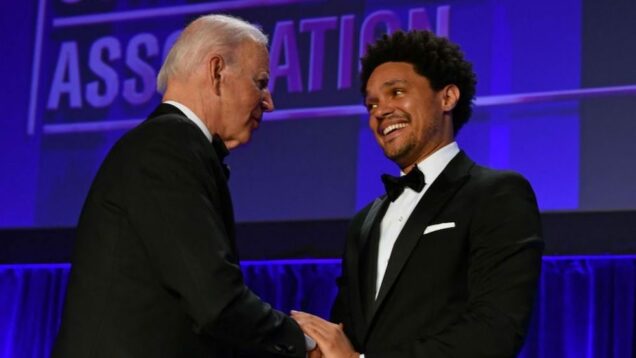 U.S. President Joe Biden has mocked himself over his low approval rating, his age and Donald Trump’s dislike for the media.

He cracked the jokes while speaking at the White House Correspondents Association dinner on Saturday night.

He joked he was happy to be among people, the journalists, who have even a lower approval rating than he.

Getting serious, he praised journalists covering the Russian invasion of Ukraine as he resumed the Washington tradition.

After being canceled for two years due to COVID-19 pandemic and boycotted by Donald Trump during his presidency, the event returned with gusto, featuring remarks by comedian Trevor Noah.

“I’m really excited to be here tonight with the only group of Americans with a lower approval rating than I have,” Biden said.

“We had a horrible plague followed by two years of COVID,” he joked.

In a further sideswipe at Mr Trump, Mr Biden said: “Just imagine if my predecessor came to this dinner this year. Now that would really have been a real coup.”

This was a jibe at Mr Trump’s attempt to overturn the election he lost to Mr Biden in 2020.

His remarks took a more serious turn, thanking journalists for their courage in covering Ukraine and beyond, before making a plea for national unity.

“A poison is running through our democracy… with disinformation massively on the rise,” Biden said. “You, the free press, matter more than you ever did in the last century. I really mean it.”