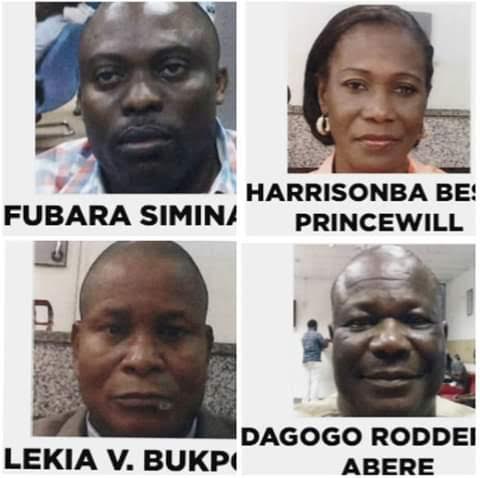 Some those declared wanted by EFCC

Siminayi, who is a governorship aspirant, is wanted over a suspected N117 billion fraud, alleged criminal conspiracy, money laundering, misappropriation of public funds, and abuse of office.

In a wanted list posted on its website, the EFCC also declared Maxwell Odum of the defunct MBA Forex wanted for allegedly defrauding investors of N213 billion.

The anti-graft agency officials, comprising two men and one woman, identified as Lekia V. Bukpor, Dagogo Rodderick Abere, and the only woman among them, Harrisonba Bessi Princewill, a cashier, wanted over alleged criminal conspiracy, money laundering, misappropriation of public funds and abuse of office to the tune of N117billion.

The suspects were declared wanted by the EFCC for offences ranging from money laundering to obtaining money by false pretence, fraud, internet-related offences and issuance of dud cheques.

Fubara Siminayi is one of the Governorship Aspirants vying to succeed Governor Nyesom Wike.

They are among 50 suspects declared wanted as published on the EFCC website and signed by it Spokesman, Wilson Uwugaren.

Another principal suspect who hailed from Rivers State is Maxwell Odum, the owner of the failed MBA forex that trapped about N217 Billion.