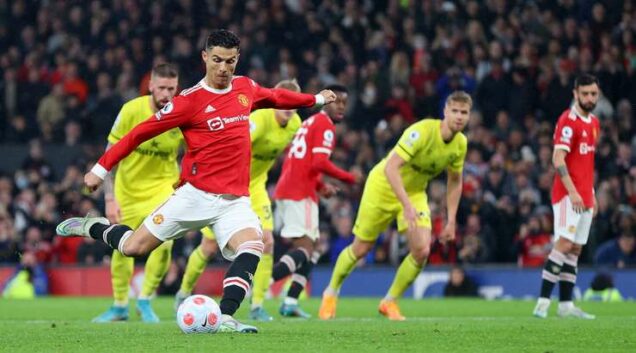 United have played 36 games with two remaining and will hope that Arsenal and Tottenham who have two outstanding games lose their matches.

The homers opened scoring on nine minutes through Bruno Fernandes.

Anthony Elanga displayed great vision and sent a pass to Bruno Fernandes, who showed brilliant composure inside the box to bury the ball from close range in the back of the net.

A superb goal from Cristiano Ronaldo on 44 minutes was ruled offside after VAR review.

Ronaldo had latched on to a perfect pass and fired an excellent low shot into the middle of the net.

He, however, got unto the scoresheet on 61 minutes from the penalty spot after he was brought down in the box.

Ronaldo won the battle of wills as he slotted the ball into the back of the net, giving goalkeeper David Raya no chance to make it 2-0 for United.

Raphael Varane scored his first goal for United and made it 3-0 for the club.

He won himself some space inside the box after a cross from the corner kick and blasted the ball into the net. His effort went into the middle of the goal.