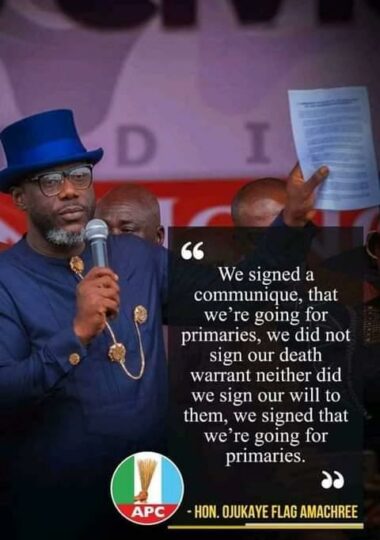 Ojukaye Flag Amachree, an aspirant on the platform of All Progressives Congress APC for Rivers 2023 governorship election has has vowed to lead a revolution in the party of a level playing field is not given to all those aspiring to fly the flag of the party in the election.

Amachree spoke while addressing his supporters in Port Harcourt on Monday insisted that he will contest against other aspirants and win the ticket to represent APC at Rivers 2023 governorship election.

He therefore rejected the selection of Tonye Cole who he described as unpopular as the consensus candidate of APC for Rivers governorship election.

He said when he signed to abide by whoever emerges as Governorship candidate, he didn’t sign his death warrant to support an “unpopular candidate picked by a handful people without the input of Rivers people in APC”

He warned that the party may lose the governorship election against other political parties if an “unpopular candidate” is fielded.

Amachree who spoke amidst cheering by his supporters dangled the copy of the agreement the 12 aspirants signed to support whoever emerges as governorship candidate of Rivers APC.

He said his decision to contest as the flag bearer for APC is borne out competence, capacity ,track record of service as Chairman of Asari-Toru local government Council.

He said his insistence that a level playing field should be created for all aspirants in the election of governorship candidate of APC should not be termed disloyalty to the leaders of the party in Rivers, but an exercising his fundamental human rights to vote and be voted for.

Amachree had purchased the APC Expression of Intent and Nomination governorship forms in Abuja and he returned to Port Harcourt on Sunday where he was received by crowd of supporters at the Port Harcourt International Airport.

He had promised to address his supporters today.

Amachree hails from Kalabari, one of the riverine -Ijaw part of Rivers that Chibuike Rotimi Amaechi, Minister of Transportation and the leader of the party in the state has been advocating that Governorship slot should be zoned.