Sad tales of seven Nollywood stars who died in 2022 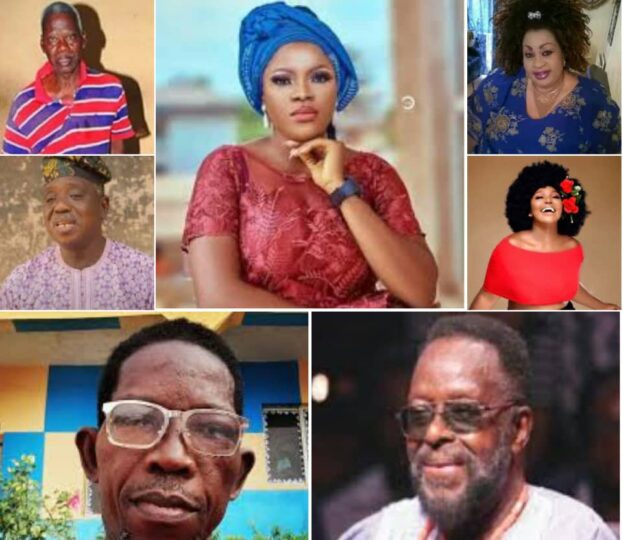 The year 2022 has not been so good for the Nollywood industry, as it is left to mourn the death of young and old actors and actresses. Between January and April, seven actors and actresses have sadly departed to the great land beyond and will never be seen in action again.

Veteran Nollywood actor, Lari Williams died on February 28, 2022 at the age of 81 after a protracted illness.

Williams was educated at CMS Grammar School, Lagos. He was the first actor to ever perform on top of Zuma Rock in Abuja FCT, 1,200 feet high, where he performed his late friend, Maman Vatsa’s poem, ‘The bird that sings in the rain.’

Williams was the first president of Actors’ Guild of Nigeria in today’s Nollywood. He was in the cast of Village Headmaster, Nigeria’s first soap opera. He was in the first home video ever made in Nigeria, titled The Witch Doctor.

The actress died at the age of 59 in the United Kingdom.

Her family members broke the news of her death but did not announce the cause of her death.

Shade was well known for her dramatic style of makeup, especially her curvy brows.

The veteran actress gained prominence in the movie ‘Oluweri Mabo Ojo’ where she got her nickname.

The movie industry was left to mourn on April 1, 2022 when  the death of popular Yoruba actor, Dejo Tunfulu, with the real name, Kunle Mac-Adetokunbo, was announced He was aged 49.

He was a prominent Yoruba comic actor, writer, and producer.

The late actor, during his lifetime, was famed for playing the role of a clown in movies, bringing laughter and joy to his fans across the country and beyond.

Tunfulu began his acting career in the earlier part of his life when he first featured in a television programme titled “Theatre Omode.” the first movie he acted in was ‘Aje ni Iya mi’, where he played the role of Dejo.

His movie career was greatly inspired by Fausat Balogun (Madam Saje) and Kayode Olasehinde (Baba Ajirebi), with whom he worked closely.

He shot into the limelight for his role in the “Omo Oran” movie, featuring the veteran actor Fatai Adetayo (Lalude).

On March 23, the death of Takor Veronica shook the Nollywood industry. She was found dead in a hotel room in Benue, North Central Nigeria few days after celebrating her birthday.

he upcoming actress celebrated her birthday on 12 March, 2022. She reportedly died in the hotel room at Nyinma area of Makurdi, Benue State.

It was not clear what led to her death, but her friends have been mourning her death on social media.

The death of veteran Nollywood actor, Romanus Amuta was announced on February 10, 2022. He died after battling a protracted illness.

Amuta, 79, made waves after he played Natty in the popular 80’s sitcom “New Masquerade.”

He began acting in 1974 and had his tutelage under late Oyin Adejobi.

The pretty Nollywood actress, Chinedu Bernard was reported to have slumped and died while cleaning the Chapel of St. Leo the Great Catholic Church, Enugu on April 29, 2022.

She was rushed to the East Side hospital in Enugu State where she was pronounced dead by doctors.

The curvy Nollywood actress who is from Enugu state was born on May 26. She was in her 20s when she died.

Bernards had featured in the following Nollywood movies: The Regret, Royal Bracelet, Onlocked, My Sister’s Man, Love Without Conscience, Just A Wish, Money Fever, Who Runs The City, among others.