COAS Yahaya to troops: Take the fight to bandits' enclaves 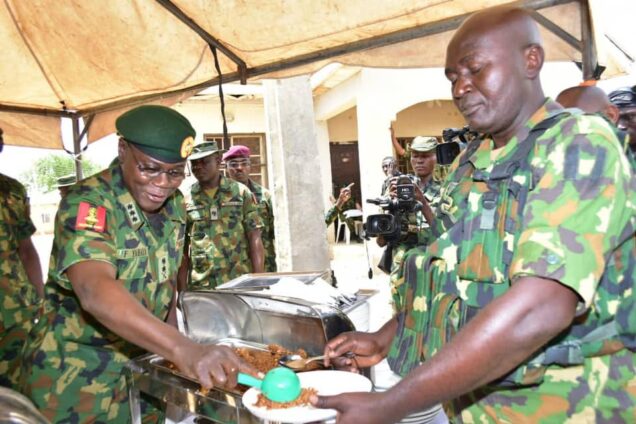 The Chief of Army Staff (COAS), Lt.-Gen. Faruk Yahaya, on Tuesday in Sokoto urged troops to intensify operations and take the fight to bandits in their enclaves.

The Director, Army Public Relations, Brig.-Gen. Onyema Nwachukwu, in a statement on Tuesday, said the COAS gave the charge when he had lunch with the troops of Operation Hadarin Daji to mark the Eid-el-fitri.

COAS Faruk Yahaya commended the troops for the successes recorded so far and urged them not to relent towards meeting the expectations of the nation.

He assured the troops that more logistics would be deployed into the theatre to enhance their combat efficiency.

COAS Yahaya also performed the groundbreaking for the establishment of a new Forward Operations Base (FOB) Isa, in Isa Local Government Area of the State.

COAS Yahaya said the initiative to build the new FOB Isa in the eastern part of the state was premised on its strategic importance to the ongoing operations.

He said the FOB would facilitate the planning and execution of several operations, urging traditional rulers and communities to cooperate with the troops to checkmate banditry and other heinous crimes in the region.

At the Government House, Gov. Aminu Tambuwal lauded the troops for their effort in the ongoing operations and reiterated his support to the Nigerian army in tackling the security challenges in the state.

Abubakar said the traditional institution would continue to sensitise residents in their domain to support the military and other security agencies in their effort to address the security challenges.